In October 2007, the US Food and Drug Administration (FDA) launched a program to bolster its generic approval process, which now involves 215 full-time staff members.1 The FDA says it applies as rigorous a process to generics as to brand-name drugs to demonstrate that generics are bioequivalent to their branded counterparts.1 The introduction of new generics to the market offers plans a great opportunity to cut costs and potentially pass the savings to their members. In deed, because they cost but a fraction of the branded prototypes, generics now constitute the majority of prescriptions being filled by plan members, according to Medco Health Solutions.2 In 2007, the FDA approved or gave tentative approval to 682 generics, a record number.1 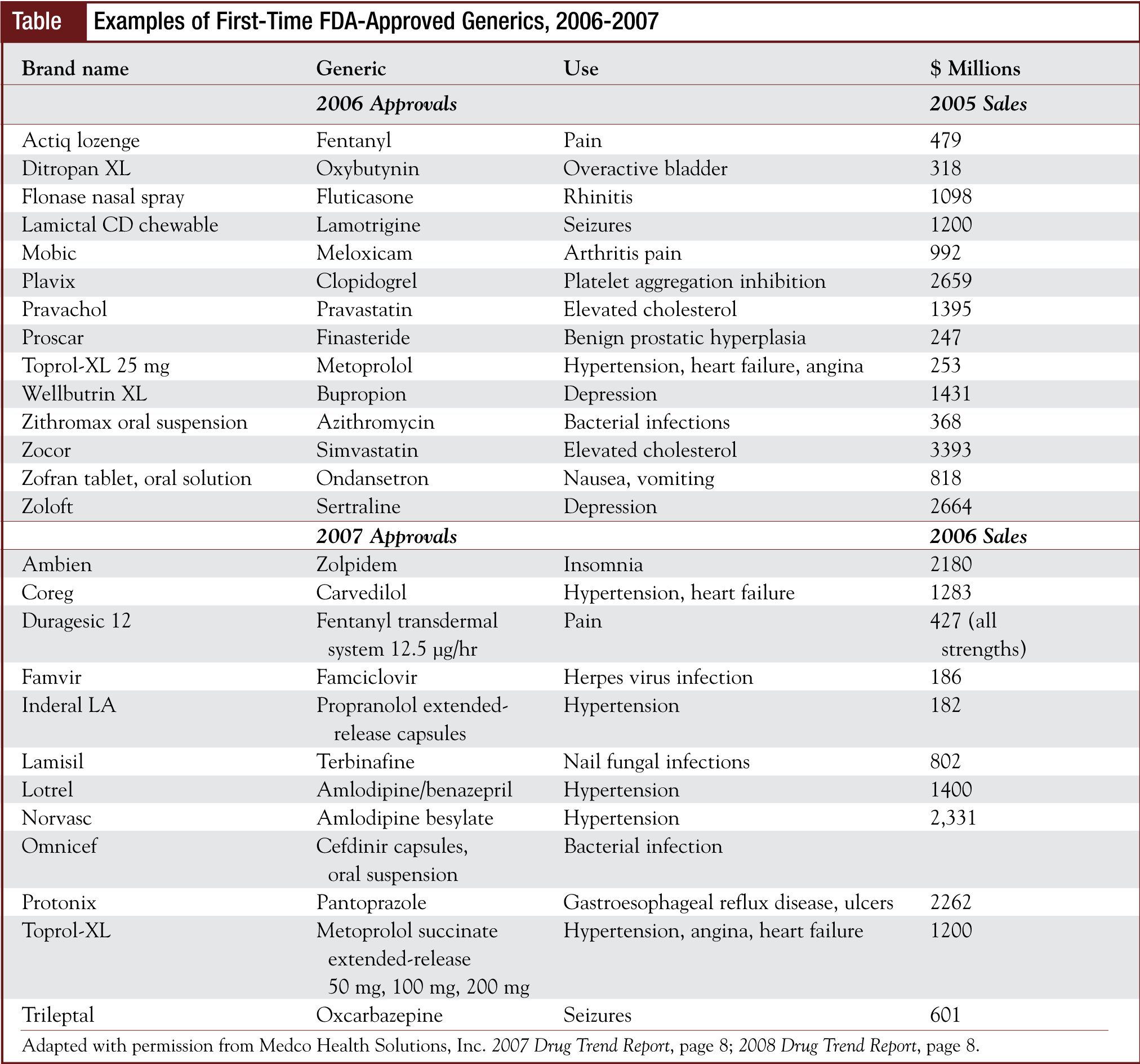 In 2006 and 2007, many branded agents received FDA approval as bioequivalents (Table). And over the next 3 years, according to Drug Trend Report 2008, "drugs with total US sales of nearly $24 billion could lose patent protection."3

As of June of this year, the FDA approved generic versions of several blockbusters, including Fosamax (alendronate) and Aricept (donepezil), and most recently, on June 30, the popular antipsychotic Risperdal (risperdone); it was approved at varying strengths, leading Gary Brueler, director of the FDA's Office of Generic Drugs in the Center for Drug Evaluation and Research, to comment, "This generic drug approval is another example of the FDA's efforts to increase access to safe and effective generic drugs as soon as the law permits."4 A day after the approval, Teva Pharmaceuticals announced it had begun shipping its generic version of Risperdal.5 Earlier this year, Teva won a dispute with the FDA, claiming it was the first to file the 180-day exclusivity regulation. A new hearing on this is now scheduled for September.5 The generic product will carry the same "black box" warning that appears on the branded Risperdal, but the labeling itself may differ, because "some uses of the drug are protected by patents and exclusivity,"4 according to the FDA.

It is therefore not surprising that with increasing numbers of blockbusters coming off patent recently, and many more expected to lose their patent in the next few years, relations between makers of branded agents and makers of their generic equivalents are heating up. The enormous success of new generics is inversely mirrored by the tremendous loss to the makers of branded products (and to a lesser degree to pharmacy benefit managers). For example, in the first month after the introduction of generic products for Zoloft (sertraline) in August 2006, "the brand-name product lost 85% of its overall share market."2 While branded pharmaceutical companies are trying to defend their return on investment, generic makers are attempting to get into the field early on, often using the 180-day exclusivity rule to gain a financial advantage. In fact, many of the fights between these 2 types of drug makers now involve the 180-day exclusivity ("authorized generics").

While drug-maker feuds can be expected to continue, health plans can continue to garner substantial savings by introducing generics early on to the plan and passing a portion of the savings to their members. Designing drug benefits with low or no copay can potentially boost compliance and further reduce costs to plans and members.

The Value of Generics to Health Plans

PAYORS/PATIENTS: As noted in this article, the value of generics for the American public is well recognized. Managed care organizations and pharmacy benefit managers continue to develop strategies to encourage appropriate use of generics within their membership. Such strategies include lowered copayments, generics first step-edits, and generic promotional efforts. These programs—along with the large number of blockbuster drugs that have or will become available as generics between 2006 and 2010—have seen health plan utilization of generics reach unprecedented levels. The value of this to members is obvious—more drugs at lower prices means less out-of-pocket cost.

Numerous studies have shown that as out-ofpocket cost rises, the number of medication users and the level of compliance drop. Ultimately, it will need to be shown that enhanced patient compliance and persistency with generic drug use result in improved health outcomes. However, even before that is clearly demonstrated, it makes abundant sense to take advantage of lower-cost medication therapy when it is possible and clinically appropriate. In a time when virtually all services to members and healthcare costs in general are increasing at a rate that is much faster than the rate of inflation, the movement to generics and the associated costsavings are a refreshing change of pace.
Related Items
Return to Business During a Pandemic: Market Collaboration and Health Benefit Trends
June 2020 Vol 13, No 3 published on July 1, 2020 in Industry Trends
Preparing for Healthcare After COVID-19: New Challenges Facing Payers
June 2020 Vol 13, No 3 published on July 1, 2020 in Industry Trends
Key Trends in Healthcare for 2020 and Beyond
F. Randy Vogenberg, PhD, FASHP, John Santilli, MBA
November 2019 Vol 12, No 7 published on December 5, 2019 in Industry Trends
Value-Based Agreements in Healthcare: Willingness versus Ability
Gary Branning, MBA, Michael Lynch, CPA, MBA, Kathryn Hayes
September 2019 Vol 12, No 5 published on September 17, 2019 in Industry Trends