The outlook for generics for the next 4 or 5 years continues to shine, judging from patent expiration dates for many of the topselling drugs. The generics “pipeline,” therefore, practically ensures that the past several years’ trend of increasing market share for generics will continue with a vengeance. This does not bode well for brandname manufacturers, which will each be losing billions in annual sales (Table), but it does foretell greater access to toprated yet lessexpensive medications—a positive step overall in the current state of economic morass. 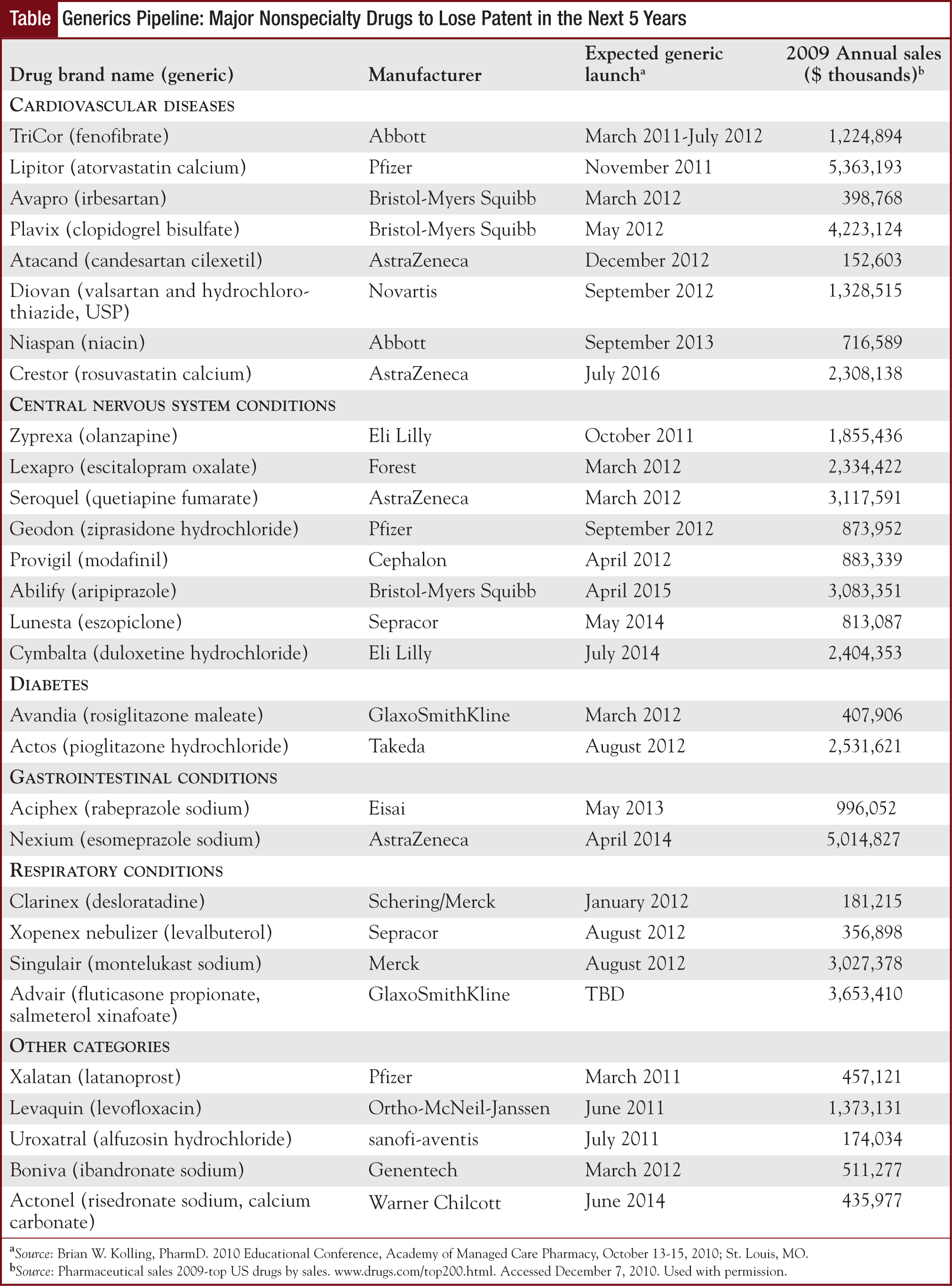 But while the success of nonbiologic generics continues, the future for biogenerics or biosimilars remains in limbo, despite the passing of the Biologic Price Competition and Innovation Act earlier this year. This first legislation toward the creation of a path for biosimilars still requires much work, as Rasmus Rojkajaer, MD, PhD, Head of Global Biologics Research & Development at Mylan, suggested on behalf of the Generic Pharmaceutical Association to industry attendees at the November 3 public hearing convened by the US Food and Drug Administration. Dr Rojkajaer stressed the need to ensure “that patients gain access to more affordable biogeneric and biosimilar products, while at the same time maintaining incentives to innovate new medicines.”1

As a result, the predictable increased growth in generics market share will continue to consist for the most part of nonspecialty drugs, even while the pharmaceutical research and development efforts are leaning heavily on specialty rather than nonspecialty products.

Of the current 50 topselling nonspecialty drugs, 25 should become available in a generic formulation within the next 5 years, according to Brian W. Kolling, PharmD, Director, Pipeline and Trend Forecasting, Part D, at Prescription Solutions.2 Specifically, significant generic activity will occur in 5 key clinical areas—cardiovascular (CV) disease, central nervous system (CNS), diabetes, gastrointestinal (GI), and respiratory conditions. This includes the patent expiration for 2 of the topselling statins—Lipitor in 2011 and Crestor in 2016, which garnered >$5 billion and >$2 billion, respectively, in 2009 sales, and the top GI drug (Nexium), with >$5 billion (Table).3

Of the 10 topselling agents worldwide, 3 top CV agents in 3 different classes—a statin (Lipitor), an angiotensin receptor blocker (Diovan), and an antiplatelet (Plavix)—will lose patent by 2012, to the tune of $10.94 billion (in 2009) combined3 in lost revenue to their manufacturers.

In addition, the patent expiration of 8 key CNS drugs—with billions of dollars in 2009 sales, each, for 5 of them (Abilify, Cymbalta, Lexapro, Seroquel, and Zyprexa)3—further reinforces the potential impact of this trend toward greater access to generic medications on patient management, as well as on overall drug cost reductions for patients and health plans.

Therefore, despite the lack of significant progress on the biosimilars front by the end of 2010, the outlook for nonspecialty generic drug activity remains bright and will continue to lead the rapidly approaching 80% in generic market share as a percentage of total prescriptions written in the United States, and with it the increased access to popular drugs, albeit wrapped in new clothes, as well as considerable cost reductions for patients, health plans, and employers.