Multiple Myeloma Treatments Are Moving Rapidly from Bench to Bedside

Treatments for multiple myeloma have advanced rapidly over the past 15 years as research has fostered an improved understanding of the mechanisms of the disease. These discoveries have been translated into effective drugs, most notably bortezomib (Velcade), thalidomide (Thalomid), and lenalidomide (Revlimid). 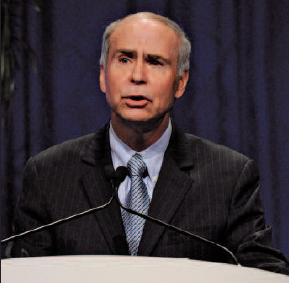 Combination therapy with melphalan (Alkeran) and prednisone was long the standard of care for the treatment of multiple myeloma, with stemcell transplant reserved for select patients. Advances beyond these therapies have emerged rapidly as the research by Dr Anderson broadened be yond the myeloma cell surface to the bone marrow microenvironment as a driver of disease pathogenesis.

“Multiple myeloma represents a new paradigm in drug development, due to the remarkable therapeutic efficacy of targeting tumor cells in their microenvironment,” he said. Newly discovered agents interfere with the mechanisms by which myeloma cells grow, survive, develop resistance, and migrate within the bone marrow.

The immunomodulatory drug lenalidomide, which directly induces apoptosis but also targets cells in the tumor microenvironment, was another result of Dr Anderson’s work.

Lenalidomide also progressed rapidly from bench to bedside and was approved in 2006 for use with dexa - methasone (Decadron) for the treatment of relapsed multiple myeloma.

Along with thalidomide and bortezomib, lenalidomide is used routinely in conventional cytotoxic and transplant regimens for multiple myeloma.

Novel Classes in the Pipeline

Pomalidomide, another immunomodulatory agent currently under development, has shown good activity in patients resistant to lenalidomide and bortezomib. Other novel classes of drugs are histone deacetylase inhibitors (eg, panobinostat), heat shock protein 90 inhibitors, and the alkylphospholipid AKT inhibitor perifosine. Some of these are being explored as a part of rational combinations of therapies.

The use of genomics to personalize approaches to the treatment of multiple myeloma is another research interest of Dr Anderson’s. Genetic profiling is identifying genes that are upregulated or downregulated in the progression to multiple myeloma.