Diabetes affects 25.8 million individuals in the United States, an estimated 8.3% of the US population.1 Furthermore, approximately 79 million US adults aged >20 years have prediabetes.1 Based on the aging of the US population and its projected increasing incidence in the coming decades, diabetes is estimated to affect 1 in 3 US adults by 2050.2 Effective preventive strategies, particularly in high-risk individuals, may reduce the projected increase in the prevalence of diabetes.2

Diabetes is a chronic disease that is associated with multiple comorbidities, including microvascular, macrovascular, and neuropathic complications that impact the patient’s quality of life.1,2 Diabetes is the seventh leading cause of death in the United States and is a major cause of stroke and heart disease, as well as the leading cause of kidney failure, new cases of blindness, and nontraumatic lower-limb amputations.1 Patients with diabetes are also at an increased risk for hypertension and depression.1

In 2012, diabetes accounted for $245 billion in total healthcare costs in the United States3; of this total, direct medical costs accounted for $176 billion, and indirect costs (eg, increased absenteeism, reduced productivity, lost productivity, and disability) accounted for $69 billion.3 Overall, the medical expenses for patients with diabetes are approximately 2.3 times higher than for individuals without diabetes.3 In fact, more than $1 in $5 of US healthcare dollars is spent on the care of patients with diagnosed diabetes; more than 50% of that expenditure is directly attributable to diabetes.3

Approximately 90% to 95% of all cases of diabetes are type 2 diabetes mellitus, a disease that is characterized by insulin resistance and the gradual decline in the ability of the pancreas to produce insulin.1

Diabetes management is complex and requires multiple risk-reduction strategies beyond glycemic control, according to the American Diabetes Association (ADA).4 The management of diabetes demands ongoing medical care in addition to patient self-management, education, and support to prevent and to reduce long-term complications.4 Lifestyle and behavioral changes are crucial aspects of diabetes care.1

The therapeutic goals for type 2 diabetes include achieving clinical and biochemical glucose targets, mitigating hypoglycemia, avoiding weight gain and/or assisting with weight loss in individuals who are obese, and reducing increasing complications, particularly cardiovascular risks.5 Glycemic control has been shown to be an effective strategy to decreasing the morbidity and mortality associated with type 2 diabetes by reducing complications. Every 1% reduction in glycated hemo­globin (HbA1c) is associated with a 40% reduction in diabetes-­related microvascular complications, including diabetic nephropathy, neuropathy, and retinopathy.1,4

The ADA recommends a general target goal of <7% HbA1c level for adults with diabetes, acknowledging that this goal is subject to adjustment, depending on the patient’s duration of disease, comorbid conditions, age, known cardiovascular complications or advanced microvascular complications, and other patient factors.4 The American Association of Clinical Endocrinologists recommends a target HbA1c level of <6.5%, recognizing that this goal may be too aggressive for some patients and not aggressive enough for others (ie, younger patients for whom a lower target may prevent subsequent complications).5

The glucagon-like peptide (GLP)-1 receptor agonists represent a relatively recent class of antihyperglycemic drugs. Several GLP-1 receptor agonists with a longer duration of action than exenatide twice daily include ­liraglutide once daily and exenatide once weekly. A new once-weekly GLP-1 option was recently added to this drug class.

On April 15, 2014, the US Food and Drug Administration (FDA) approved albiglutide (Tanzeum; GlaxoSmithKline), a GLP-1 receptor agonist subcutaneous injection, as an adjunct to diet and exercise to improve glycemic control in adult patients with type 2 diabetes mellitus.8 Commenting on the approval of albiglutide, Curtis Rosebraugh, MD, MPH, Director of the Office of Drug Evaluation II in the FDA’s Center for Drug Evaluation and Research, said, “Tanzeum is a new treatment option for the millions of Americans living with type 2 diabetes. It can be used alone or added to existing treatment regimens to control blood sugar levels in the overall management of diabetes.”8

In addition, the FDA requires a Risk Evaluation and Mitigation Strategy program for albiglutide, which includes a communication plan to notify healthcare providers about the serious risks associated with this agent.8

Albiglutide is not recommended as a first-line treatment for patients whose diabetes is inadequately controlled with diet and exercise.9 In addition, albiglutide is not indicated for the treatment of type 1 diabetes, diabetic ketoacidosis, or for patients with diabetes and preexisting severe gastrointestinal disease. Albiglutide has not been studied in patients with a history of pancreatitis or in combination with prandial insulin.9

Albiglutide is administered once weekly at any time of the day, with or without food, via subcutaneous injection (ie, injection pen) in the abdomen, thigh, or upper arm; the initial dose is 30 mg.9 The dose can be increased to 50 mg once weekly in patients who require additional glycemic control. If a dose of albiglutide is missed, it should be administered within 3 days of the missed dose. The lyophilized powder that is contained in the injection pen must be reconstituted before administration.9

Albiglutide is an agonist of the GLP-1 receptor that augments glucose-dependent insulin secretion. In addition, albiglutide slows gastric emptying.9

Albiglutide has been studied as monotherapy and in combination with metformin, metformin and a sulfonyl­urea, thiazolidinedione (with and without metformin), and insulin glargine (with or without oral antidiabetic drugs). The efficacy of albiglutide was also evaluated in comparative studies with placebo, glimepiride, pioglitazone, liraglutide, sitagliptin, insulin lispro, and insulin glargine.9

Overall, albiglutide 30 mg and 50 mg were evaluated in a series of 8 phase 3 clinical trials, collectively known as the Harmony program that involved more than 5000 patients, 2000 of whom had received albiglutide.9,10 In 5 of the 8 studies, the optional uptitration of albiglutide from 30 mg to 50 mg was allowed if glycemic response with 30 mg was inadequate.9

In these studies, albiglutide demonstrated clinically relevant reductions from baseline in HbA1c levels compared with placebo.9 No overall differences in glycemic effectiveness or body weight were observed across the demographic subgroups with respect to age, sex, race, ethnicity, or the duration of diabetes.9 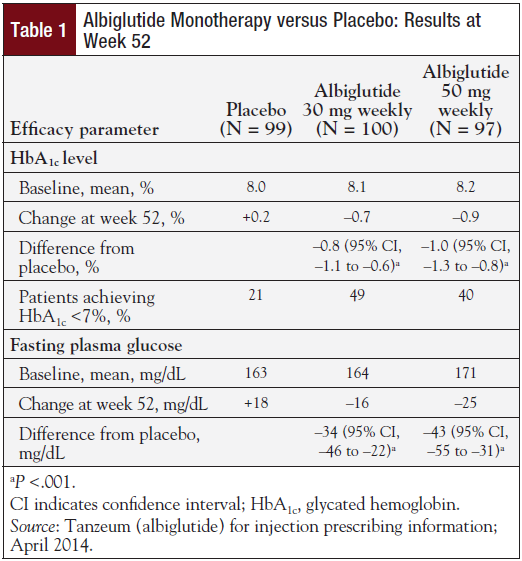 Add-on to metformin. Albiglutide was evaluated as a combination therapy in a 104-week randomized, double-­blind clinical trial in 999 patients (mean age, 55 years) with type 2 diabetes that was inadequately controlled with background metformin therapy (≥1500 mg daily).9,12 In this study, albiglutide 30 mg was administered subcutaneously weekly (with optional uptitration to 50 mg weekly after a minimum of 4 weeks) and compared with placebo, sitagliptin 100 mg daily, or glimepiride 2 mg daily (with optional titration to 4 mg daily).9,12 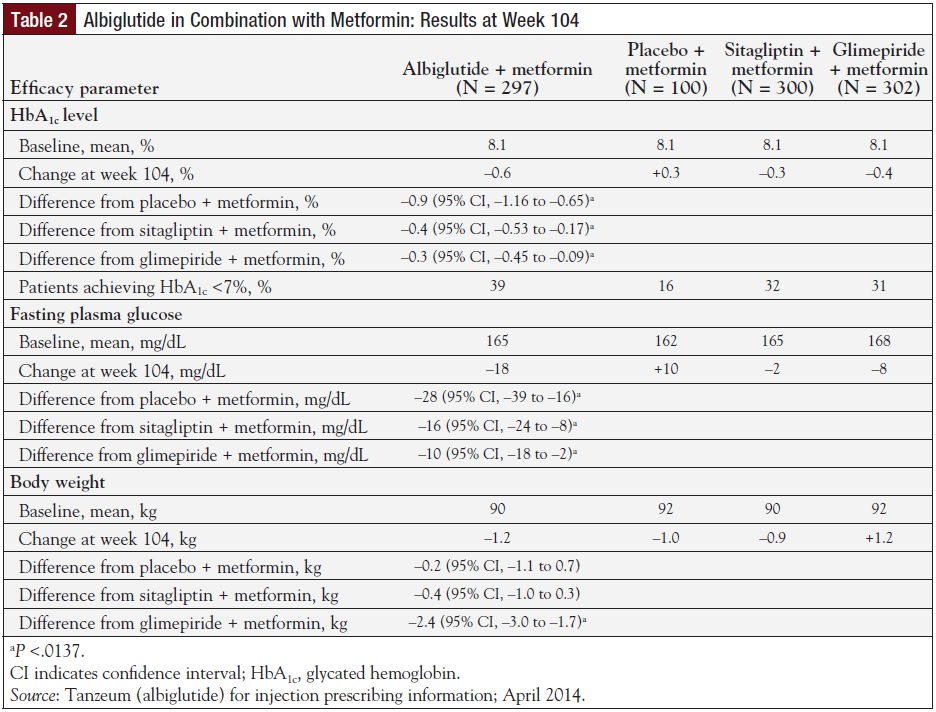 Add-on to pioglitazone. In a 52-week, randomized, double-blind clinical trial, albiglutide was evaluated in 299 patients with type 2 diabetes that was inadequately controlled with pioglitazone ≥30 mg daily (with or without metformin ≥1500 mg daily). Patients (mean age, 55 years) were randomized to receive albiglutide 30 mg or placebo weekly.9,13

The results from the primary and secondary analyses are shown in Table 3. Treatment with albiglutide resulted in a significant reduction in HbA1c levels from baseline at week 52 compared with placebo. In this study, 44% of patients in the albiglutide group achieved HbA1c levels of <7% compared with 15% of patients in the placebo group. The adjusted mean change from baseline in weight did not differ significantly between albiglutide (+0.3 kg) and placebo (+0.5 kg) at week 52.9,13 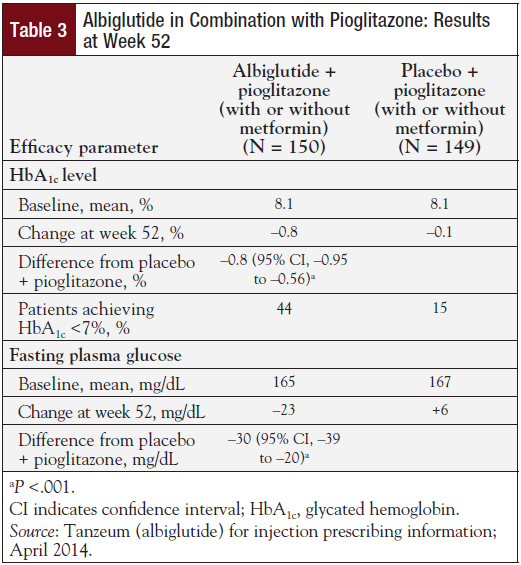 Hypoglycemia. Hypoglycemia can occur when albiglutide is used in combination with insulin secretagogues (eg, sulfonylureas) or with insulin. Lowering the sulfonyl­urea or insulin dosage should be considered when starting albiglutide therapy.9

Macrovascular outcomes. Conclusive evidence of macrovascular risk reduction with albiglutide or any other antidiabetic drug has not been established.9

Pregnancy. Albiglutide may cause fetal harm and should only be used if the potential benefit justifies the potential risk to the fetus.9

Nursing mothers. It is not known whether albiglutide is excreted into human milk during lactation. Therefore, either nursing or albiglutide should be discontinued, taking into account the importance of the drug to the mother.9

Geriatric use. A total of 19% of patients in the 8 phase 3 clinical trials who received albiglutide were aged ≥65 years, and <3% were aged ≥75 years. No difference in safety or efficacy was observed between older and younger patients, but greater sensitivity of some older individuals cannot be ruled out.9

The FDA approval of albiglutide has added a new once-weekly treatment option as an adjunct to diet and exercise for the treatment of patients with type 2 diabetes. Albiglutide is a GLP-1 receptor agonist administered via an injection pen once weekly.

This new drug therapy provides patients a treatment option with a longer duration of action, which may offer patients the added convenience of fewer dosing versus treatment regimens with more frequent dosing.

Albiglutide was studied as monotherapy and in combination with metformin and other frequently used antidiabetic medications. It was also investigated versus placebo, glimepiride, pioglitazone, liraglutide, sitagliptin, insulin glargine, and insulin lispro. In clinical trials, albiglutide was shown to produce clinically relevant reductions from baseline in HbA1c levels versus placebo in patients with type 2 diabetes.