A recent analysis of claims data from an oncology registry associated with a large US commercial health plan has demonstrated the substantial cost burden associated with NSCLC.3 This study, which was published in 2013, assessed the total cost of treatment for more than 300 patients with advanced NSCLC who were continually enrolled in the plan from diagnosis until death.3

Traditionally, patients with metastatic NSCLC have been managed with combinations of cytotoxic agents. Although the use of platinum-based doublets has improved the median overall survival for patients with advanced NSCLC from 4 to 5 months to 8 to 10 months (in treatment-naïve patients), these chemotherapy combinations are limited by significant toxicities, including myelosuppression, nausea and vomiting, and severe fatigue.4-6

As knowledge of tumor-cell biology in lung cancer evolves, small molecules that target specific genetic mutations offer the opportunity to manage patients with NSCLC using a personalized approach.6 In NSCLC, multiple driver oncogenes have been identified, including EGFR, ALK, and KRAS.6 Among North American patients with advanced NSCLC, approximately 10% express mutations in EGFR,7 approximately 23% express mutations in KRAS,8 and up to 13% express activating mutations or translocations of ALK.9

Identifying EGFR and ALK mutations can help to decide whether a given patient with NSCLC can benefit from today’s targeted therapies, including erlotinib and afatinib (EGFR inhibitors) or crizotinib (an ALK inhibitor).

Granted an accelerated approval by the US Food and Drug Administration (FDA) in 2011, crizotinib was the first treatment available for patients with metastatic NSCLC whose tumors are ALK-positive.10 An open-label, active-controlled, multinational, randomized clinical trial demonstrated prolonged progression-free survival with crizotinib compared with chemotherapy in ALK-positive, metastatic NSCLC. Vision disorders, nausea, diarrhea, vomiting, constipation, edema, elevated transaminases, and fatigue were the most common adverse reactions observed among recipients of crizotinib in this trial.10 To overcome the documented resistance to crizotinib, researchers continue to investigate medications that target ALK mutations.6 Novel kinase inhibitors currently being investigated in clinical trials for patients with ALK mutation NSCLC include alectinib, ganetespib, and AP26113.6,11

On April 29, 2014, the FDA approved ceritinib (Zykadia; Novartis Pharmaceuticals), a kinase inhibitor, for the treatment of patients with metastatic ALK-positive NSCLC who are intolerant of, or whose disease progressed during therapy with, crizotinib.12 This approval was granted under the FDA’s accelerated process based on unpublished clinical trial data demonstrating significant tumor response rate and duration of response.12 Improvements in survival or disease-related symptoms have not been demonstrated.13

The approval of ceritinib was based on the results of a multicenter, single-arm, open-label clinical trial that enrolled 163 patients with ALK-positive metastatic NSCLC that had progressed with crizotinib or who were intolerant of that drug.12,13 Ceritinib was administered at a dose of 750 mg once daily.12,13

“Zykadia represents an important treatment option for ALK-positive NSCLC patients who relapse after starting initial therapy with crizotinib,” noted lead investigator Alice T. Shaw, MD, PhD, of Massachusetts General Hospital Cancer Center in Boston.14 “This approval will affect the way we manage and monitor patients with this type of lung cancer, as we will now be able to offer them the opportunity for continued treatment response with a new ALK inhibitor.”14

In vitro and in vivo assays demonstrate that ceritinib, a kinase inhibitor, hinders the proliferation of ALK-­dependent cancer cells by blocking the autophosphorylation of ALK, as well as ALK-mediated phosphorylation of STAT3, a downstream signaling protein. Ceritinib also targets insulin-like growth factor 1 receptor, insulin receptor, and ROS1.13

The multicenter, single-arm, open-label trial of ceritinib enrolled 163 patients with the ALK-mutation NSCLC whose disease progressed while receiving crizotinib or those who were intolerant of crizotinib.13 Objective response rate (ORR) according to the Response Evaluation Criteria in Solid Tumors version 1.0 was the primary end point of this study. This parameter was evaluated by the investigators and by a central Blinded Independent Review Committee.13

Overall, 91% of patients had progressed with previous treatment of crizotinib, 84% had received ≥2 previous therapies, and 93% had adenocarcinoma histology.13 Common sites of extrathoracic metastases included the brain (60%), liver (42%), and bone (42%).13 Retrospective verification of ALK positivity was performed by review of local test results for 99% of patients.13

The phase 2 study demonstrated that ceritinib is active in patients with ALK-positive NSCLC, with an ORR of 54.6% by investigator assessment and a median duration of response of 7.4 months. All participants received ceritinib at an initial dose of 750 mg daily. The median duration of exposure to ceritinib was 6 months.13 The findings of the Blinded Independent Review Committee were similar to those of the investigators. Table 1 lists the findings on ORR and duration of response from this study.13 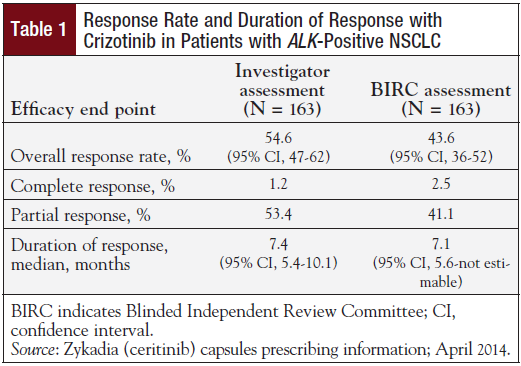 The safety of ceritinib was established based on data from 255 patients with ALK-positive disease in the phase 2 study—246 patients with NSCLC and 9 patients with other cancer types.13 A total of 59% of the patients receiving ceritinib required dose reductions as a result of adverse reactions.13 The adverse reactions that led to dose reductions or interruptions were reported in ≥10% of patients and included increased alanine aminotransferase (ALT; 29%), nausea (20%), increased aspartate aminotransferase (AST; 16%), diarrhea (16%), and vomiting (16%).13

Overall, 10% of patients receiving ceritinib discontinued therapy as a result of adverse reactions.13 Pneumonia, interstitial lung disease/pneumonitis, and decreased appetite were the most common adverse drug reactions that led to discontinuation in ≥1% of patients.13 Of note, ceritinib should be discontinued in patients who do not tolerate 300 mg daily dosing.13 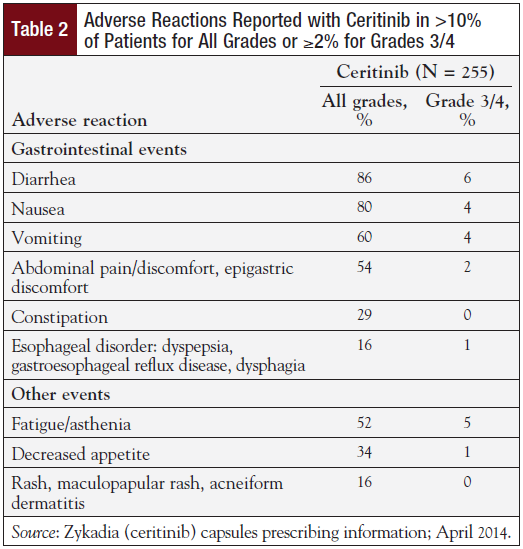 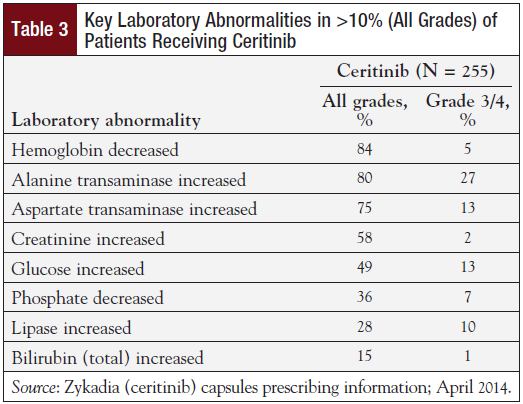 Ceritinib has no contraindications.

Severe/persistent gastrointestinal toxicity. Of the 255 patients receiving ceritinib in the phase 2 study, 96% had diarrhea, nausea, vomiting, or abdominal pain; severe cases were reported in 14% of the patients. Dose modification was required in 38% of patients as a result of diarrhea, nausea, vomiting, or abdominal pain. Patients should be managed using standards of care, as needed. Based on the severity of the adverse drug reaction, ceritinib should be withheld and then resumed with a 150-mg dose reduction.13

Hepatotoxicity. Of the 255 patients in the phase 2 study, 27% had elevations in ALT that were greater than 5 times the upper limit of normal. Permanent discontinuation resulting from elevated transaminases and jaundice was required in 1 (0.4%) patient. Patients should undergo laboratory tests, including ALT, AST, and total bilirubin, once monthly and as clinically indicated. More frequent testing is warranted in patients who develop transaminase elevations. Ceritinib should be withheld, dose reduced, or should be permanently discontinued based on the severity of the hepatotoxicity reaction.13

Ceritinib should be avoided in patients with congenital long QT syndrome. Patients with congestive heart failure, bradyarrhythmias, or electrolyte abnormalities, and those taking medications known to prolong the QTc interval should undergo periodic electrocardiograms (ECGs) and electrolyte monitoring.13

Embryofetal toxicity. Based on its mechanism of action, ceritinib may cause fetal harm when administered to a pregnant woman.13

Pregnancy. Ceritinib has a pregnancy Category D. Women of reproductive potential should be made aware of the potential hazard to a fetus, as well as the need to use effective contraception during treatment with ceritinib and for at least 2 weeks after the completion of therapy.13

Nursing mothers. Whether ceritinib or its metabolites are excreted in human milk is not known. Nursing mothers who take ceritinib should discontinue breastfeeding.13
Pediatric use. The safety and effectiveness of ceritinib have not been established in pediatric patients.13

Geriatric use. Clinical studies of ceritinib did not include sufficient numbers of patients aged ≥65 years to assess its effect on older patients. Of the 255 patients in the phase 2 study, 40 (16%) were aged ≥65 years.13

NSCLC remains the main cause of death from cancer in the United States for men and women. The disease is still diagnosed mainly at advanced stages; therefore, prognosis is poor, and long-term survival is rare. Ceritinib, the second oral kinase inhibitor approved for the initial treatment of ALK-positive metastatic NSCLC, has demonstrated efficacy with manageable side effects. Ceritinib joins crizotinib as the second FDA-approved agent for this subset of patients with NSCLC, offering an effective alternative to cytotoxic therapy. Ceritinib may confer clinical value in other cancers in which ALK mutations are present. Clinical studies are evaluating ceritinib in pediatric malignancies and other tumors characterized by genetic abnormalities of ALK.15