The Year 2015 Had Highest Number of Drug Approvals in the New Millennium, but with Controversy

The year 2015 was interesting for new drug approvals. As was the case in the recent past, these approvals were dominated by specialty drugs, many of which were first-in-class therapies. However, considerable controversy surrounded some of these approvals, and the pricing of new drugs was often at the forefront of news articles.

A Near-Record of New Drug Approvals

First-time drug approvals in the United States reached a 19-year high in 2015, with 45 new therapies receiving clearance from the US Food and Drug Administration (FDA), an increase from the 41 new drugs in 2014 and the highest number in the new millennium.1,2 In addition, the FDA approved 6 new recombinant therapies, including 4 blood disorder agents and 2 vaccines.1 The number of drugs approved each year varies significantly, as can be seen in the Figure.1 The 2015 approvals also represent the highest new drug approvals since 1996, when a record of 53 drugs was approved by the agency.3 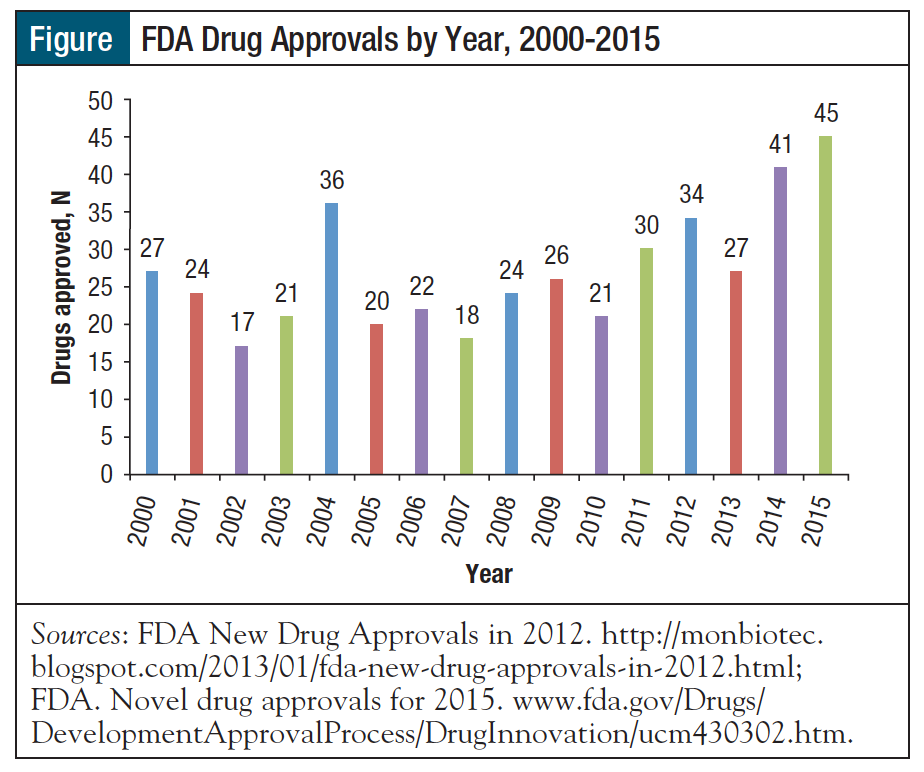 Overall, 16 of the 45 (36%) new drugs approved in 2015 were first-in-class.1 Although oncologic agents dominated the new FDA approvals in 2015, notable first-in-class and orphan drugs were approved in several other therapeutic areas.1,4 The launch of new cholesterol-lowering drugs was highly anticipated, with the first 2 agents approved in 2015—first-in-class alirocumab (Praluent) was approved in July, and evolocumab (Repatha) received an orphan drug approval in August. These drugs work through a novel mechanism of action by inactivating the proprotein convertase subtilisin-kexin type 9 (PCSK9) protein in the liver. Also on the cardiovascular front, for patients with chronic heart failure, 2 new agents were added to the therapeutic armamentarium, with the approvals of ivabradine (Corlanor) in April and the combination of sacubitril and valsartan (Entresto) in July.1,4

Furthermore, 2 noteworthy first-in-class drugs include sugammadex (Bridion), which was approved to reverse the effects of neuromuscular blockade induced by rocuronium bromide and vecuronium bromide in adults, and idarucizumab (Praxbind), which was granted accelerated approval for the management of patients taking dabigatran in emergency or life-threatening situations when bleeding cannot be controlled.

Perhaps one of the most publicized and controversial was the approval in August of flibanserin (Addyi), which is indicated for the treatment of acquired, generalized hypoactive sexual desire disorder in premenopausal women.1 This approval came after a long review by the FDA. Although the public support for the agent was significant, questions about its safety and efficacy were also raised. Ultimately, flibanserin was approved with a REMS (Risk Evaluation and Mitigation Strategy) program, which is required to ensure the drug's safe use, and prescribers must become certified to prescribe the drug.5

Rare diseases also had several first-in-class drug approvals, including asfotase alfa (Strensiq) for juvenile-onset hypophosphatasia, the combination of ivacaftor and lumacaftor (Orkambi) for cystic fibrosis in patients with the F508del mutation, and sebelipase alfa (Kanuma) for lysosomal acid lipase deficiency.1,4 These new drugs represent therapeutic advances for patients who have previously had few therapeutic options.

In the area of targeted immunomodulators, secukinumab (Cosentyx) is the first interleukin (IL)-17A inhibitor approved for the treatment of psoriasis, and mepolizumab (Nucala) is the first IL-5 antagonist monoclonal antibody approved for asthma.1,4

Although specialty and first-in-class drugs dominated the landscape, important small-molecule agents were also approved in 2015, including lesinurad (Zurampic) for hyperuricemia in patients with gout, insulin degludec (Tresiba) to improve glucose control in patients with diabetes, and cariprazine (Vraylar) for the treatment of schizophrenia.1,4

Therapeutic options continued to expand rapidly in 2015. In the past 2 years, 86 new drugs have been approved by the FDA, which has created new treatment opportunities for physicians and their patients but at a significant cost, which created considerable controversy in 2015.

FDA drug approvals are considered a barometer of industry innovation and of the government's efficiency in reviewing new therapies. This is a significant benefit for patients and their physicians who have access to new therapies, but such innovation comes at a substantial cost. The shift of focus from small-molecule drugs that treat large populations to complex specialty agents that often target small populations is driving a resurgence in pharmacy cost trends. For example, an article in the Wall Street Journal reported that "Recent treatments for hepatitis C, cancer and multiple sclerosis that cost from $50,000 annually to well over $100,000 helped drive up total U.S. prescription-drug spending 12.2% in 2014, five times the prior year's growth rate, according to the Centers for Medicare and Medicaid Services." 6

As noted, the trend toward specialty medicines is good news for the pharmaceutical industry and for a small number of patients who benefit from the drugs; however, it is likely to fuel the ongoing debate over the rising prescription drug prices, which has become a top concern for employers and for payers, as well as for patients. Recently, drug pricing has come under congressional scrutiny, and is even an issue on the presidential campaign trail; democratic presidential candidates Hillary Clinton and Bernie Sanders have outlined proposals designed to curb high drug pricing. Currently, the FDA is not permitted to consider drugs' prices when it is approving them, but some expert analysts argue it should.7

The pharmaceutical industry often defends the high cost of new therapies by citing a 2014 study from the Tufts Center for the Study of Drug Development, which concluded that it costs pharmaceutical companies $2.6 billion to develop a new drug-a significant increase from the $802 million estimate cited by that center in 2003.8 However, that figure was challenged in May 2015 by Jerry Avorn, MD, Professor of Medicine at Harvard Medical School, in an article published in the New England Journal of Medicine.9 Dr Avorn noted that the 2014 findings from Tufts were presented at a media event that offered limited information regarding the methods used to arrive at the $2.6-billion figure, making it difficult to know much about the solidity of the approach or the validity of the reported number.9

A January 2016 article from the Associated Press notes that "Drug makers are getting better at picking the most promising drugs in their research and development pipelines. Between 2007 and 2011, only one in 19 drugs entering early-stage testing actually reached the market, according to industry data... .Today, one in 13 early--stage drugs make it to market."7 It is certain that the debate regarding current drug pricing methodologies and the impact of rising drug costs on the healthcare system will continue.

The majority of industry experts foresee continued growth in high-cost specialty agents, especially for cancer, immunologic conditions, neurologic conditions, and rare diseases. With faster approval processes, such as breakthrough designations and accelerated approvals, it is likely that 2016 will see a similar number of new drug approvals in 2016 as were approved in 2015.