Multiple myeloma is a cancer of plasma cells in the bone marrow that often leads to bone destruction and bone marrow failure.1,2 According to the American Cancer Society, more than 26,800 new cases of multiple myeloma were diagnosed in 2015, and 11,240 deaths were attributed to the disease.3

Although the overall incidence of multiple myeloma continues to increase, the mortality rates associated with this malignancy have declined in the past 20 years.1,6 Specifically, the advent of novel therapy options for multiple myeloma, as well as improvements in high-dose therapy and supportive care have contributed to extended survival for patients with this disease.6

New anticancer drugs and novel combinations have emerged in part thanks to improved understanding of the bone marrow microenvironment and the biology of multiple myeloma.7 Immunomodulatory drugs (IMiDs) and proteasome inhibitors now represent the cornerstones of initial treatment for multiple myeloma based on their proved ability to enhance the overall response rates and survival.2,7

Because novel agents for multiple myeloma have had a considerable impact on the healthcare budget, understanding their relative cost-effectiveness is important for ensuring their efficient use. Overall, 2 recent evaluations of the economics of these new agents in multiple myeloma resulted in similar conclusions.8,9

One of the studies used claims data from more than 2600 US-based patients with multiple myeloma, showing that the 1-year costs of bortezomib-based therapy were similar to those of non-novel combinations (approximately $112,000 each), whereas the costs of thalidomide- and lenalidomide-based regimens were significantly higher (approximately $130,500 and $159,200, respectively) than non-novel combinations.8 This study also found that patients taking thalidomide and lenalidomide had higher out-of-pocket costs in light of Medicare Part D's coverage gap for outpatient drugs.8

The second study modeled the cost-effectiveness of novel agents combined with melphalan and prednisone in patients with newly diagnosed multiple myeloma who were ineligible for a transplantation. The researchers concluded that adding bortezomib to melphalan plus prednisone was more cost-effective than adding thalidomide or lenalidomide to that regimen.9

Despite strides in the treatment of multiple myeloma, patients will experience disease relapse after initial treatment and several lines of therapy are typically required.10 Specifically, resistance to bortezomib and to lenalidomide is being observed with increasing frequency; therefore, there remains a marked need for additional therapeutic options for patients with double-refractory multiple myeloma.11

On November 16, 2015, the US Food and Drug Administration (FDA) approved the first monoclonal antibody, daratumumab (Darzalex; Janssen Biotech), for the treatment of patients with multiple myeloma who have received at least 3 previous lines of therapy, including a proteasome inhibitor and an IMiD, or for the treatment of patients whose disease is double-refractory to proteasome inhibitors and IMiDs.12,13 Daratumumab was approved using the FDA's accelerated approval program, which provides early patient access to a new therapy while its developer conducts clinical trials to confirm the drug's benefits.12

Overall, 2 open-label studies demonstrated complete or partial responses in patients with relapsed and/or refractory multiple myeloma; these studies were the basis for the FDA's approval of daratumumab.12-15

Daratumumab targets CD38, a protein expressed on the surface of multiple myeloma cells and other hematopoietic cells.13 According to Richard Pazdur, MD, Director of the FDA's Office of Hematology and Oncology Products, "Targeting proteins that are found on the surface of cancer cells has led to the development of important oncology treatments. Darzalex provides another treatment option for patients with MM [multiple myeloma] who have become resistant to other therapies."12

CD38 is a transmembrane glycoprotein that is expressed on the surface of hematopoietic cells, including multiple myeloma cells. CD38 is involved in receptor-mediated adhesion, cell signaling, and modulation of cyclase and hydrolase activity.13

Because CD38 is also expressed on myeloid-derived suppressor cells and on a subset of regulatory T-cells, these cells are also susceptible to daratumumab-mediated cell lysis.13

The recommended dose of daratumumab is 16 mg/kg of body weight, administered as an intravenous infusion. Dosing is recommended according to the following schedule13:

SIRIUS enrolled 106 patients with relapsed and/or refractory multiple myeloma. Daratumumab (16 mg/kg) was administered with preinfusion and postinfusion medications until unacceptable toxicity or until disease progression. The primary end point was the overall response rate as assessed by an Independent Review Committee using the International Myeloma Working Group criteria.13,14

The majority of patients enrolled in SIRIUS were female (51%) and white (79%). The patients' median age was 64 years (range, 31-84 years). Patients had received a median of 5 previous therapies: 80% of patients had undergone autologous stem-cell transplantation; other previous therapies included bortezomib (99%), lenalidomide (99%), pomalidomide (63%), and carfilzomib (50%).13 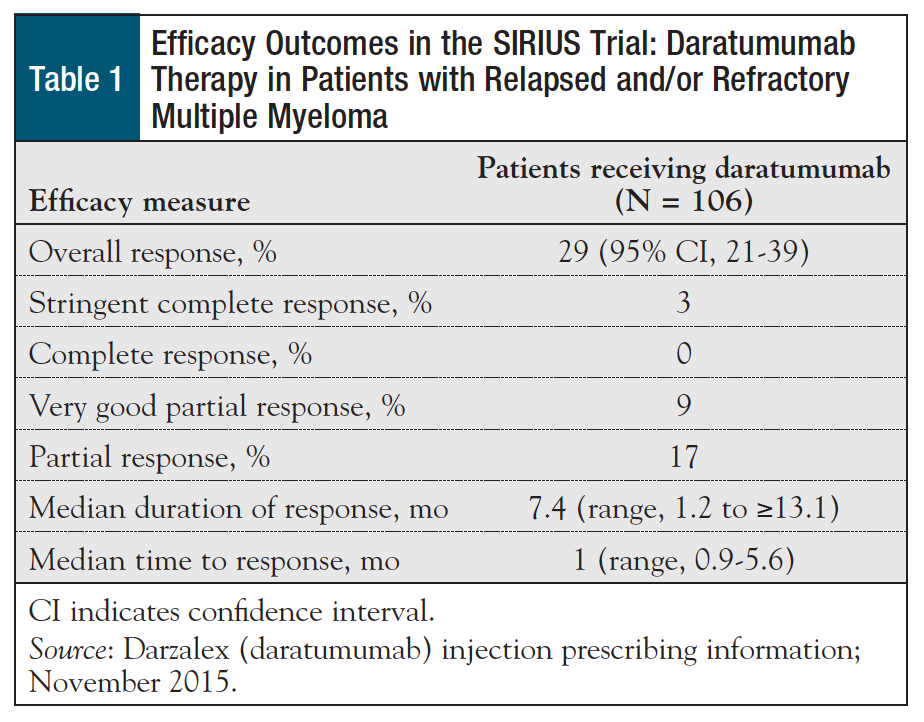 A total of 42 patients with relapsed and/or refractory multiple myeloma received daratumumab (16 mg/kg) in the GEN501 study.13,15 The primary end point was the overall response rate as assessed by an Independent Review Committee.13,15

The overall response rate was 36%, which included 1 complete response, 3 very good partial responses, and 11 partial responses (Table 2).13 The median duration of response has not been reached (range, 2.2 to ≥13.1 months).13,15 The median progression-free survival was 5.6 months.15 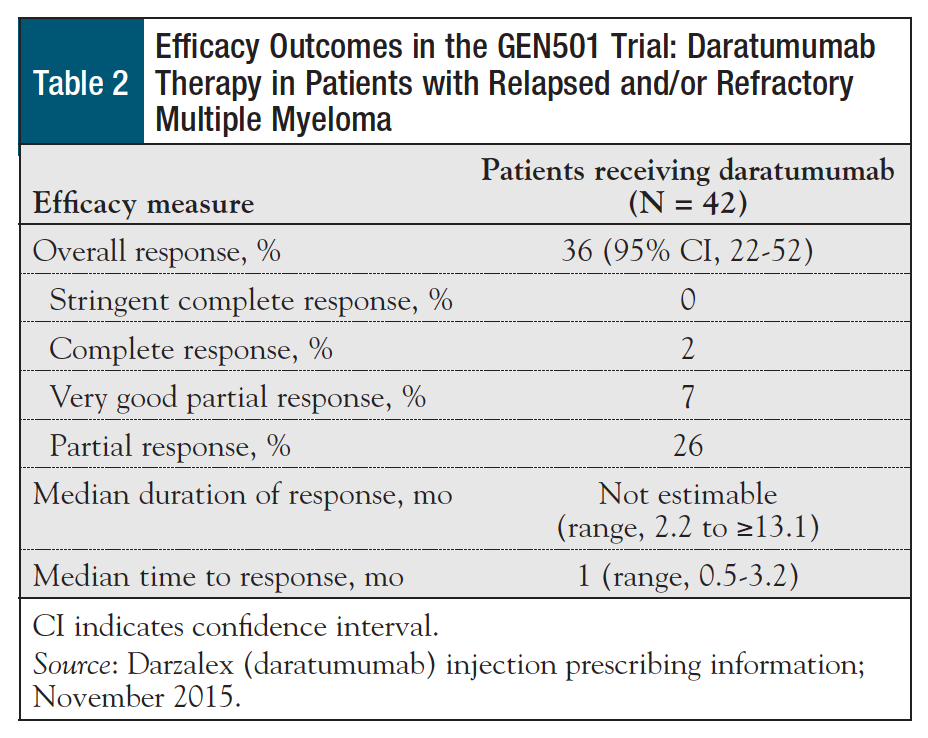 The safety data for daratumumab are based on 156 adult patients with relapsed and/or refractory multiple myeloma who received 16 mg/kg of daratumumab in 3 open-label clinical trials. The median duration of exposure to daratumumab was 3.3 months, with a maximum of 20.4 months.13

Serious adverse reactions were reported in 33% of patients, including pneumonia (6%), general physical health deterioration (3%), and pyrexia (3%).13

Daratumumab has no contraindications, and no formal drug interaction studies have been conducted with daratumumab.13

Interference with serologic testing. Daratumumab binds to CD38 on red blood cells, resulting in a positive indirect antiglobulin (Coombs) test result. This result can persist for up to 6 months after the last infusion. Blood transfusion centers should be notified of daratumumab's interference with serologic testing, and blood banks should be informed that a patient has received daratum­umab. Patients' blood samples should be typed and screened before starting therapy with daratumumab.13

Interference with complete response determination. Daratumumab, a humanized IgG1 kappa monoclonal antibody, can be detected on the serum protein electrophoresis and immunofixation assays used to monitor endogenous M-protein levels. Determination of complete response and of disease progression can be affected in patients with IgG kappa myeloma protein.13

Pregnancy. Based on its mechanism of action, daratumumab can cause fetal myeloid or lymphoid-cell depletion, and can affect bone density. The administration of live vaccines to neonates and infants who were exposed to daratumumab in utero should be deferred until a hematology evaluation is completed.13

Lactation. There is no information about daratumumab's potential impact on human milk or on the breast-fed infant. The benefits of breast-feeding should be considered relative to the mother's need for daratumumab.13

Pediatric use. The safety and effectiveness of daratum­umab in pediatric patients have not been established.13

Daratumumab is the first FDA-approved monoclonal antibody that targets CD38 that has demonstrated single-agent efficacy in patients with multiple myeloma who have received several previous treatments, including those whose disease is double-refractory to a proteasome inhibitor and an IMiD agent. To date, 2 clinical trials have demonstrated that this infused agent results in deep and durable responses.