Although the overall incidence of multiple myeloma continues to increase, the mortality rates associated with this malignancy have declined during the past 20 years.1,6 Specifically, the advent of novel therapy options for multiple myeloma, and improvements in high-dose therapy and supportive care have contributed to extended survival for patients with multiple myeloma.6

New anticancer drugs and novel combinations have emerged in part because of improved understanding of the bone marrow microenvironment and the biology of multiple myeloma.7 Immune modulators and proteasome inhibitors now represent the cornerstones of initial treatment for multiple myeloma based on their proven ability to enhance the overall response rates and survival.2,7

Because novel agents for multiple myeloma have had a considerable impact on the healthcare budget, understanding their relative cost-effectiveness is important for ensuring efficient use.8,9 Overall, 2 recent evaluations of the economics of these new agents in multiple myeloma resulted in similar conclusions.8,9

One of the studies used claims data from more than 2600 US-based patients with multiple myeloma, and found that the 1-year costs of bortezomib-based therapy were similar to those of non-novel combinations (approximately $112,000 each), whereas the costs of thalidomide- and lenalidomide-based regimens were significantly higher (approximately $130,500 and $159,200, respectively) than non-novel combinations.8 In addition, patients taking thalidomide and lenalidomide had higher out-of-pocket costs in light of Medicare Part D's coverage gap for outpatient drugs.8

Despite strides in treatment, patients with multiple myeloma will experience disease relapse after initial treatment, and several lines of therapy are typically required.10 Specifically, resistance to bortezomib and to lenalidomide is being observed with increasing frequency; therefore, there remains a marked need for additional therapeutic options for this patient population.10,11

On July 24, 2015, the US Food and Drug Administration (FDA) approved a new indication for carfilzomib (Kyprolis; Amgen) for use in combination with lenalidomide (Revlimid) plus dexamethasone for the treatment of patients with relapsed and/or refractory multiple myeloma who have received 1 to 3 lines of therapy.12 The expanded indication was based on data from the ASPIRE clinical trial, a phase 3 study demonstrating that the combination of carfilzomib, lenalidomide, and dexamethasone improved progression-free survival compared with lenalidomide and dexamethasone alone.12-14

Carfilzomib was initially approved by the FDA in 2012 as monotherapy in patients with relapsed and/or refractory multiple myeloma who received at least 2 previous therapies, including bortezomib and an immunomodulatory agent, and whose disease progressed during or within 60 days after completing the previous therapy.15

On January 21, 2016, the FDA approved yet another indication for carfilzomib to be used in combination only with dexamethasone for patients with relapsed and/or refractory multiple myeloma who have received 1 to 3 previous therapies.14,16 This decision also converted carfilzomib's monotherapy accelerated approval in this setting to a full FDA approval.14,16

Carfilzomib is a proteasome inhibitor that irreversibly binds to the N-terminal threonine-containing active sites of the 20S proteasome, the proteolytic core particle within the 26S proteasome. In vitro studies demonstrated carfilzomib's antiproliferative and proapoptotic properties in solid and hematologic tumor cells.14

Carfilzomib is administered intravenously in single-dose vials containing 60 mg of the drug. Carfilzomib must be refrigerated before use.14

Hydration can be provided before and after carfilzomib administration as needed. Premedication with oral or intravenous (IV) dexamethasone is appropriate before all cycle 1 doses, and if symptoms of an infusion reaction develop or reappear.14

Carfilzomib plus Lenalidomide and Dexamethasone

When given in combination with lenalidomide and dexamethasone, carfilzomib is administered as a 10-minute IV infusion on 2 consecutive days weekly for 3 weeks, followed by a 12-day rest period. Each 28-day period is considered 1 treatment cycle.14 The recommended starting dose of carfilzomib is 20 mg/m2 in cycle 1 on days 1 and 2. If tolerated, the carfilzomib dose can be escalated to 27 mg/m2 on day 8 of cycle 1. After cycle 13, the day 8 and day 9 doses of carfilzomib are omitted. Carfilzomib is discontinued after cycle 18.14

When given in combination with dexamethasone, carfilzomib is administered as a 30-minute IV infusion on 2 consecutive days weekly for 3 weeks followed by a 12-day rest period.14

Carfilzomib should be administered at a starting dose of 20 mg/m2 in cycle 1 on days 1 and 2. If tolerated, the carfilzomib dose should be escalated to 56 mg/m2 on day 8 of cycle 1.14

The FDA approval of carfilzomib for use in combination with lenalidomide and dexamethasone was based on results of ASPIRE, a phase 3, randomized, controlled, open-label clinical trial that enrolled 792 patients (median age, 64 years) with relapsed and/or refractory multiple myeloma who had received 1 to 3 previous therapies.13,14 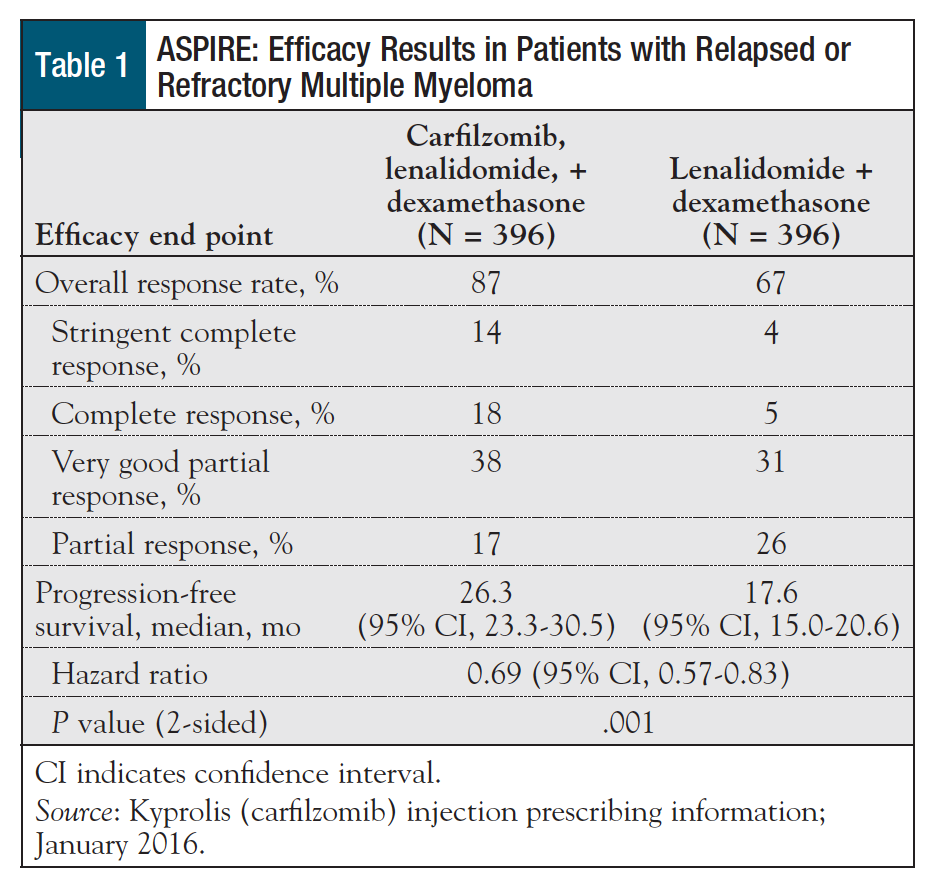 According to the ASPIRE study investigators, the 3-drug combination resulted in durable responses, a substantially higher response rate, and longer progression-free survival compared with the 2-drug combination without carfilzomib among patients with relapsed disease.13

Carfilzomib has no contraindications and no drug interactions.14

Cardiac toxicities. New onset or worsening of preexisting cardiac failure, restrictive cardiomyopathy, myocardial ischemia, and myocardial infarction, including fatalities, have occurred after carfilzomib treatment. Carfilzomib should be with held for grade 3 or 4 cardiac events until recovery. The total fluid intake should be adjusted in patients at risk for or with baseline cardiac failure.14

Acute renal failure. Monitor renal function regularly. The dose of carfilzomib should be reduced or withheld as appropriate.14

Tumor lysis syndrome (TLS). Cases of TLS, including fatalities, have occurred with carfilzomib.14 Patients with a high tumor burden are at an increased risk for TLS. Adequate hydration is important before administration of carfilzomib in cycle 1, and in subsequent cycles as needed. Uric acid–lowering drugs can be considered in patients at risk. Carfilzomib should be interrupted until TLS resolves.14

Dyspnea. Carfilzomib should be discontinued for grade 3 or 4 dyspnea until resolution.14

Hypertension. Hypertension, including hypertensive crisis and emergency, has been reported with carfilzomib.14 Monitor blood pressure regularly. If hypertension cannot be adequately controlled, carfilzomib should be withheld.14

Posterior reversible encephalopathy syndrome (PRES). Carfilzomib should be discontinued if PRES is suspected.14

Lactation. There are no data regarding the presence of carfilzomib in human milk, the effects on the breast-fed infant, or the effects on milk production.14

Pediatric use. There are no data about the safety and effectiveness of carfilzomib in pediatric patients.14

Geriatric use. No overall differences in the effectiveness of carfilzomib were observed between older and younger patients in the ASPIRE and the ENDEAVOR clinical trials. The incidence of serious adverse events increased with age.14

Renal impairment. No adjustment to the starting carfilzomib dose is necessary in patients with baseline mild, moderate, or severe renal impairment, or in patients on long-term dialysis. Carfilzomib should be administered after the dialysis procedure.14

Carfilzomib, an IV proteasome inhibitor, now has 3 FDA-approved indications in relapsed and/or refractory multiple myeloma: as monotherapy, in combination with dexamethasone, and in combination with lenalidomide and dexamethasone. Carfilzomib-based combinations demonstrated significantly longer progression-free survival compared with active comparators based on the findings from the ASPIRE and ENDEAVOR clinical trials.

The promising clinical activity of carfilzomib continues to be evaluated in patients with multiple myeloma, as well as in other hematologic malignancies and in relapsed solid tumors.18