Lung cancer is the second most common cancer in the United States.1 In 2015, an estimated 221,200 new cases of lung cancer were diagnosed, representing 13.3% of all new cancer cases.1 Furthermore, lung cancer is the leading cause of cancer mortality in men and women, responsible for 27% of all cancer deaths, and claiming more lives than breast, colon, prostate, and ovarian cancers combined.1,2 From 2007 to 2011, there was a slight decline in lung cancer incidence and deaths.3

As with other cancers, the earlier that lung cancer is detected and treated, the better the prognosis.2 Nevertheless, approximately 22% of lung cancers have already spread to regional lymph nodes at diagnosis, and 57% have metastasized to a distant site.1 The 5-year relative survival rate for patients with lung cancer that has spread regionally is 27.4%, and only 4.2% for patients with metastatic disease.1

Scientific advances in cell biology and gene expression have fostered the development of new targeted therapies and have changed the landscape of NSCLC treatment.7 Several predictive biomarkers have emerged.7 Some of these biomarkers include the sensitizing epidermal growth factor receptor (EFGR) mutations (eg, exon 19 deletion or exon 21 L858R mutation) and the anaplastic lymphoma kinase (ALK) fusion gene.7

Molecular profiling and the evolving research and development of targeted, patient-precise treatments are transforming the therapeutic options for patients with NSCLC. In 2015, several targeted therapies—including immunotherapies, angiogenesis inhibitors, tyrosine kinase inhibitors, and monoclonal antibodies—were approved for the treatment of patients with NSCLC. Several of those approvals were new indications for drugs already available on the market, and several approvals were for novel targeted therapies—altogether, the year 2015 was a banner year for the approval of new therapy for NSCLC, significantly increasing the treatment options available for patients with lung cancer.

On November 24, 2015, the US Food and Drug Administration (FDA) approved the EFGR antagonist necitumumab (Portrazza; Eli Lilly) injection for intravenous (IV) use, in combination with gemcitabine and cisplatin, for the first-line treatment of patients with metastatic squamous NSCLC.9,10 Necitumumab is not indicated for the treatment of patients with nonsquamous NSCLC.10

The EFGR protein is expressed in the majority of NSCLC tumors, particularly in squamous-cell disease.11 Necitumumab, a recombinant human immunoglobulin (Ig)G1 monoclonal antibody, is an EFGR antagonist with potential antineoplastic activities.10,12

Commenting on necitumumab's approval, Richard Pazdur, MD, Director of the FDA's Office of Hematology and Oncology Products, said, "Lung cancer tumors can be varied, so treatment options need to be tailored to the specific type of lung cancer in the patient. Today's approval provides certain patients with squamous cell lung cancer a new option that may extend survival."9

Necitumumab is an IgG1 monoclonal antibody and an EFGR antagonist that acts by binding to EFGR and blocking the binding of EFGR to its ligands, ultimately preventing the activation and the dimerization of the receptor.12 This process may inhibit the EFGR-dependent downstream pathways, thereby blocking EFGR-dependent tumor-cell proliferation and metastasis.10,12 Based on in vitro studies, the binding activity of necitumumab also resulted in antibody-dependent cellular cytotoxicity in cells that express EFGR.10

The recommended dose of necitumumab is 800 mg (absolute dose) administered as an IV infusion for 60 minutes on days 1 and 8 of each 3-week cycle before the infusion of gemcitabine and cisplatin. Treatment with necitumumab should be continued until the disease progresses or until unacceptable toxicity occurs.10

The FDA approval of necitumumab was based on findings from SQUIRE, an open-label, controlled phase 3 clinical trial conducted at 184 sites in 26 countries. Overall, 1093 patients (median age, 62 years) with squamous NSCLC were randomized to necitumumab (800 mg) plus gemcitabine and cisplatin or to gemcitabine and cisplatin alone for a maximum of 6 cycles or until evidence for disease progression or unacceptable toxicity.10,11

The main efficacy measure was overall survival. The secondary efficacy outcome measures included investigator-assessed progression-free survival and overall response rate. The results showed that patients in the necitumumab arm had a median overall survival of 11.5 months versus 9.9 months in patients receiving gemcitabine and cisplatin alone; this represents a significant difference of more than 2 months survival with necitumumab (Table).10,11 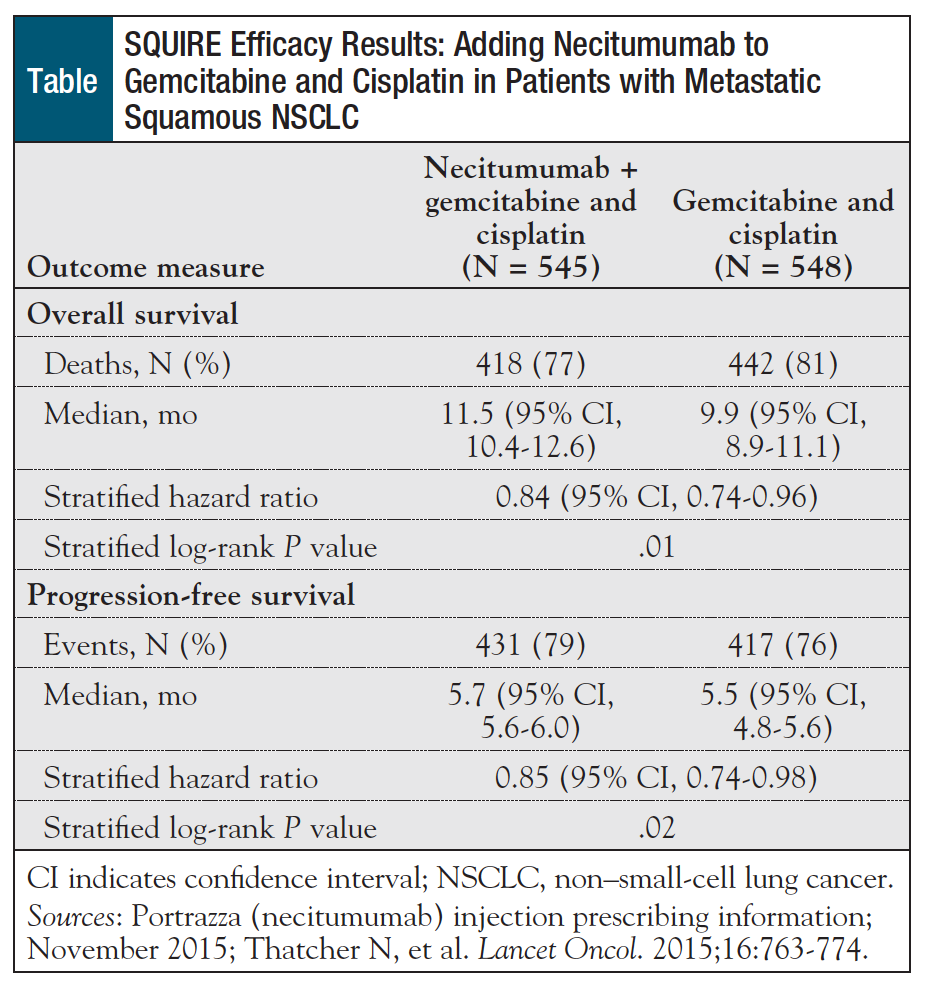 In addition, the median progression-free survival was 5.7 months in the necitumumab arm versus 5.5 months with gemcitabine plus cisplatin alone, representing a significant difference.10 There was no difference in overall response rate between the 2 study arms—31% (95% confidence interval [CI], 27-35) with necitumumab compared with 29% (95% CI, 25-33) with gemcitabine and cisplatin alone (P =.40).10

INSPIRE was a randomized, open-label clinical trial of 633 patients with nonsquamous NSCLC. The combination of necitumumab, pemetrexed, and cisplatin did not provide a clinical benefit compared with pemetrexed and cisplatin alone.10,13 This study was terminated early because of an increased rate of any-cause mortality and thromboembolic events in the necitumumab-containing arm. Therefore, necitumumab is not indicated for the treatment of patients with nonsquamous NSCLC.10

The most common adverse events (all grades) reported in patients receiving necitumumab at a rate of ≥15%, and ≥2% higher than gemcitabine and cisplatin alone included rash (44%), vomiting (29%), diarrhea (16%), and dermatitis acneiform (15%). The most common severe (grade ≥3) adverse reactions that occurred at a ≥2% higher rate in the necitumumab group versus those who received gemcitabine and cisplatin alone included thromboembolic events (5%), rash (4%), and vomiting (3%).10

Overall, 12% of patients in the SQUIRE clinical trial discontinued treatment with necitumumab because of an adverse reaction. The most common toxicity leading to the discontinuation of necitumumab was a skin rash (1%).10

Necitumumab exposure was not altered when it was administered concomitantly with gemcitabine and cisplatin.10

Cardiopulmonary arrest and/or sudden death occurred in 3% of patients who received necitumumab in combination with gemcitabine and cisplatin. The patient's serum electrolyte levels should be closely monitored during and after treatment with necitumumab.10

Hypomagnesemia occurred in 83% (severe in 20%) of patients who received necitumumab in combination with gemcitabine and cisplatin. Patients should be monitored for hypomagnesemia, hypocalcemia, and hypokalemia before the administration of each dose of necitumumab, during treatment with necitumumab, and for at least 8 weeks after completing treatment with necitumumab. Necitumumab should be withheld in patients with grade 3 or 4 electrolyte abnormalities; electrolytes should be replaced based on medical necessity.10

Dermatologic toxicities. Patients should be monitored for dermatologic toxicities, which were reported in 79% of patients who received necitumumab (with 8% severe cases) in SQUIRE. These toxicities include rash, dermatitis acneiform, acne, dry skin, pruritus, generalized rash, skin fissures, maculopapular rash, and erythema.10

Nonsquamous NSCLC. There is an increased risk for toxicity and mortality in patients with nonsquamous NSCLC who receive necitumumab plus pemetrexed and cisplatin.10

Embryo-fetal toxicity. Necitumumab can cause fetal harm when administered to a pregnant woman.10