Metastatic melanoma traditionally carries a dismal prognosis, and few patients live >1 year after the diagnosis. But the tide is turning, with the emergence of 2 novel treatments shown to prolong survival.

Approximately 50% of patients with melanoma have a V600E mutation in the BRAF gene, which is involved in cell proliferation and other aspects of cell survival. This mutation can be targeted with the BRAF inhibitor vemurafenib, which, in a phase 3 study reported at ASCO, reduced the risk of death by 63% (P <.001). 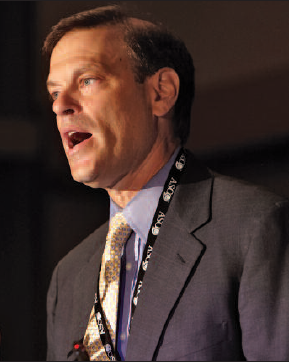 Paul Chapman, MD, of Memorial Sloan-Kettering Cancer Center in New York, reported the first interim analysis of the international study at the ASCO plenary session, noting that an im - provement in the survival of advanced disease “is really a huge step toward personalized care in melanoma.”

Other experts agreed, predicting the drug would lead to a paradigm shift in how this disease is treated.

Progression-free survival was 5.3 months with vemurafenib versus 1.6 months with dacarbazine (DTIC), for a 74% reduced risk of progression (P <.001).

Estimated overall survival (OS) at 6 months was 84% versus 64%, respectively, and the risk of death from melanoma was reduced by 63% (P <.001). Vemurafenib also led to a significantly higher response rate, 48.4% versus 5.5% with dacarbazine, Dr Chapman reported.

As a result of the very encouraging early results, the trial was halted early to allow placebo recipients to receive vemurafenib. In this and other studies, many patients have prolonged remissions lasting ≥1 year.

Although adverse events were generally relatively mild (approximately 10% grade 3+ toxicity), dose interruption or modification were required in 38% of patients. “Vemurafenib is the first single drug for melanoma to improve response rate, progression-free survival, and overall survival compared with standard chemotherapy,” Dr Chapman noted. “It is a promising new therapy for patients with metastatic BRAF V600E–mutated melanoma and a foundation upon which to build combination therapies.”

Vemurafenib is now available in an expanded access program, and US Food and Drug Administration (FDA) approval is expected for patients with BRAF mutations.

One drug that will be evaluated in combination with vemurafenib is the immune-mediating agent ipilimumab (Yervoy), which also produced solid benefits in treatment-naïve patients and received FDA approval in March 2011 for the second-line setting.

Study 024, presented at ASCO 2011, confirmed ipilimumab’s activity as a first-line agent for metastatic mela - n oma. The 502 previously untreated pa tients in this study were randomized to the standard of care with dacarbazine (ie, control group) or to dacarbazine plus ipilimumab.

Median OS was 11.2 months with ipilimumab plus dacarbazine versus 9.1 months with dacarbazine alone, a significant 28% reduction in the risk for death from melanoma (P = .009), reported Jedd Wolchok, MD, of Memorial Sloan-Kettering Cancer Center, New York.

As with vemurafenib, many re - sponses are durable, with an average remission of 19.3 months with ipilimumab plus dacarbazine compared with 8.1 months with dacarbazine.

“This is the second randomized ipilimumab phase 3 trial to show a significant survival improvement in metastatic melanoma,” Dr Wolchok said.

Kim A. Margolin, MD, of the University of Washington Fred Hutch inson Cancer Research Center in Seattle, was impressed with the results but noted that these treatments were not without side effects.

“Both agents require experience and commitment by the physician and patient to manage these unique toxicities,” she suggested.

Clinicians will undoubtedly want to use these agents, and they will need to learn how, Dr Margolin said. She suggested the BRAF inhibitor be prescribed for patients with disease symptoms, who need immediate tumor shrinkage and symptom relief.

In contrast, ipilimumab works at a slower pace and might be the first option for patients with less tumor burden and fewer symptoms, or those whose disease recurs while still taking vemurafenib.