What Do Payers Want in Oncology Diagnostics? Insights from a National Survey of Top Commercial and Medicare Health Plans

Personalized medicine is expected to transform healthcare. Its success depends on whether molecular diagnostic tests will allow drugs to be tailored to individuals or patient types, leading to improved drug efficacies and reduced drug side effects. Healthcare payers stand to benefit, because personalized medicine promises to reduce healthcare costs in the long-term. However, if molecular diagnostic tests face overwhelming barriers or an unclear path in securing coverage from healthcare payers, then companies will be less likely to develop them.

Reimbursement Intelligence, a market access consulting firm, conducted research with 50 of the top-ranked managed care health plans to better understand the current and future dynamics of the management and reimbursement of oncology diagnostics. This article reviews some of the key insights from the survey and suggests ways that diagnostic companies can better navigate the complex reimbursement landscape to maximize the clinical utility of the diagnostic tests. 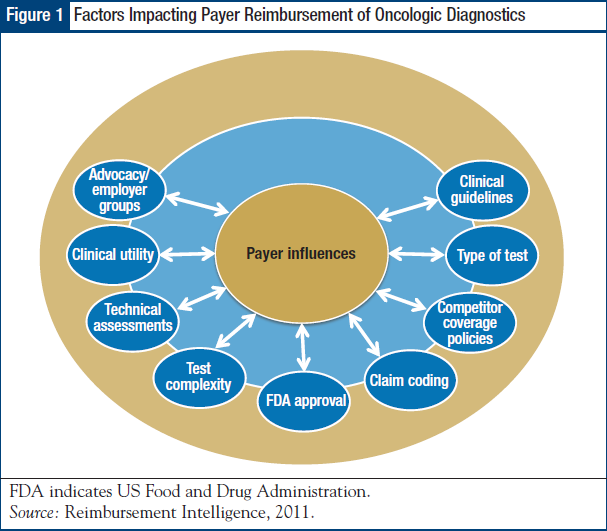 After propensity score matching, Table 2 shows that after a first emergency department visit, the test population has higher costs in nearly all subcategories contributing to the net dollars paid PPPM. This could imply that the test population requires higher intensity care on a total claims dollar basis; it is possible to consider them a “sicker” population based on claims. Second, none of the differences in dollars spent for the test group are significant (a = .05), except for “medical physician” and “emergency department.”

In addition, diagnostic developers do not have a clear set of expectations for the level of evidence that is necessary for reimbursement (eg, specific clinical trial requirements, optimal outcome measures).

The robustness of clinical data available for biomarker tests is the strongest predictor of gaining coverage. Results from our Oncology Reimbursement: 2011-2012 Report, which surveyed commercial and government managed care health plans covering >150 million lives, showed that diagnostics in breast cancer receives coverage by 83% of the payers surveyed (Figure 2).1 This is likely because the utility of diagnostic tests, such as testing for the epidermal growth factor receptor (EGFR) or HER2 overexpression, are directly tied to clinical utility. 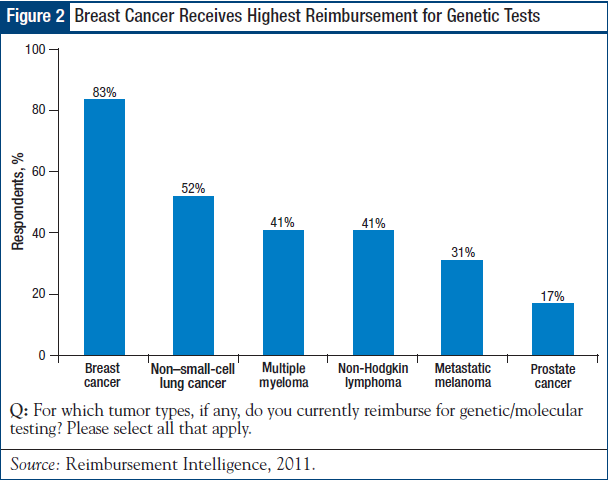 As a result, the American Society of Clinical Oncology (ASCO)2 and the National Comprehensive Cancer Network (NCCN),3 the 2 leading on - cology organizations, recently recommended HER2 mutation testing for patients with invasive breast cancer. Indeed, based on our survey, 90% of the payers indicated that clinical guidelines influence their decision to cover an oncology diagnostic test, with ASCO and NCCN guidelines given equal preference.

Clinical utility studies for molecular diagnostics are often not carried out, because they are complicated, expensive, and time-consuming to run, and moreover, they are not directly required by the US Food and Drug Ad ministration (FDA) for the approval of tests. In some instances, however, it may be possible to use surrogate end points (eg, progressionfree survival [PFS] or time to progression) to shorten the cost and duration of such studies.

Nevertheless, payers in our survey indicated that diagnostic tests must demonstrate a higher degree of sensitivity and specificity for them to have greater relevance and wider adoption (Figure 3, right graph, page 35). At the extreme, many of the esoteric diagnostic tests are marketed without FDA review as “home brew” tests under the regulatory oversight of the Clinical Laboratory Improvement Act (CLIA). Therefore, the coverage determination for this category of tests may not even have the benefit of FDA review to determine their safety and efficacy. CLIA standards do not require evidence that diagnostic tests are clinically useful, only that the tests can be performed consistently and accurately. 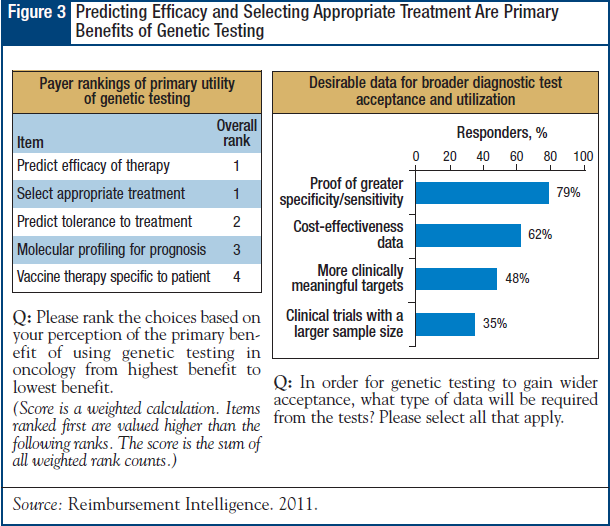 Health plans are reluctant to reimburse biomarker tests without evidence of clinical utility, because these may prove ineffective in improving patient outcomes, and therefore, are financially wasteful at a time when it has become critical to control increasing healthcare costs. Indeed, 62% of payers in our survey indicated that, for oncology diagnostic tests to gain wider acceptance, the tests must be accompanied by a demonstration of cost-effectiveness (Figure 3).

1 Early in Genomic Health’s development of the Oncotype DX breast cancer assay, the company studied the potential cost-savings of its test on the healthcare system and found that even with pricing the test at roughly $3500, the resulting average cost-savings to the system was approximately $2000 per patient. The savings are derived from the test’s ability to help steer patients with a high recurrence score to chemotherapy and those with a low recurrence score, who are less likely to benefit, away from chemotherapy.

To raise the credibility and visibility of its analyses, the company published its study in May 2005,4 just over 1 year after the launch. Similarly, Expression Diagnostics (XDx) published a health economics study for AlloMap that projected a savings of about $6500 per patient in 5-year monitoring costs, which more than justified the $2950 price for the diagnostic.

Companion Diagnostics: How Will They Be Reimbursed?

A seemingly easier path to reim-bursement is when the diagnostic is tied to the use of a drug (ie, companion diagnostic) to identify patients who are the best candidates for a particular targeted therapy. For example, in the Iressa Pan-Asia Study (IPASS), after gefitinib (Iressa), an EGFR inhibitor, failed to provide a significant overall survival benefit in a broad population of patients with non–small-cell lung cancer, it was investigated in selected patients with lung cancer (Asian nonsmokers or light smokers with EGFRpositive mutation), and showed a significant benefit in PFS versus chemo therapy. In contrast, in EGFRnegative patients, gefitinib worsened out comes compared with chemotherapy alone (1.5 months vs 5.5 months PFS).6

The FDA announced in late July the publication of a much-anticipated draft guidance on in vitro companion diagnostic devices, indicating that, with a few exceptions, the agency will require approval or clearance of the diagnostic at the same time it approves the therapeutic.7

KRASmutation analysis is indicated for patients with colorectal cancer initiating EGFR inhibitor therapy. Payers describe KRAS testing’s path to reimbursement as relatively eventless because of its inclusion in the FDA label for drugs such as panitumumab (Vectibix) and cetuximab (Erbitux).

This is supported by the results from our payer survey, in which a majority of payers indicated that they currently reimburse EGFR (for lung cancer) and BRAF testing (for colorectal cancer) for identifying patients appropriate for erlotinib (Tarceva) and panitumumab/cetuximab therapies, respectively (Figure 4). In addition, 66% and 69% of payers indicated that they currently reimburse the respective diagnostic tests separately from the therapeutic, with only 14% and 7% bundling the EGFR and BRAF test together with the therapy (Figure 4). 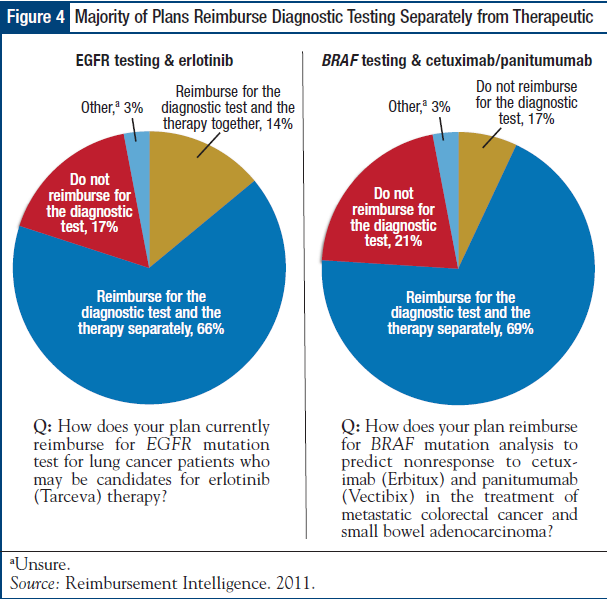 Securing Reimbursement Rates that Tie In with Value of the Diagnostic

By and large, genetic testing has yet to be specifically recognized in the reimbursement system. Because of a lack of codes tied to testing for different genes or mutations, laboratories often must build insurance claims using a strategy called code “stacking,” employing a series of codes for methodology-based steps that add up to a molecular test. However, at least for Oncotype DX, stacking existing codes based on laboratory analyses would have yielded significantly lower reimbursement, roughly one sixth of the $3500 list price.8

Although miscellaneous codes represent attractive options for developers, they are often red flags for payers, especially when the associated price is high. Furthermore, miscellaneous codes are not trackable, therefore payers cannot ascertain the volume of use without taking additional steps. These limitations in the current coding system make it difficult for payers to receive value-based reimbursement.

Specific reimbursement codes have been developed for the first time for >100 genetic tests. During a recent session held at the Centers for Medicare & Medicaid Services, the agency discussed 101 new genetic analyte codes proposed by the American Medical Association and whether they should ultimately be included in the clinical laboratory fee schedule or in the physician fee schedule. However, no final decisions were made, and they will not be adopted by Medicare until at least 2013.9