Zaltrap: A New Option for the Treatment of Patients with Metastatic Colorectal Cancer Resistant to or Progressing After an Oxaliplatin-Containing Regimen

The American Cancer Society estimated that in 2012 more than 143,000 people in the United States would be diagnosed with colorectal cancer (CRC) and more than 51,000 people would die from it.1

Burden and Impact of Colorectal Cancer
CRC is the third most frequently diagnosed cancer and the third leading cause of death of both men and women in the United States.1,2 Nearly all CRCs are adenocarcinomas, which develop from adenomatous polyps (adenomas). Although adenomas are common, only a small percentage develop into CRC, and they do so slowly.2 Patients with early-stage CRC are usually asymp­tomatic; advanced CRC may be associated with blood in the stool, rectal bleeding, and lower abdominal pain. Blood loss can result in anemia, weakness, and fatigue in some patients.1

The relative survival rates for individuals with CRC decline over time, from 83% at 1 year, 64% at 5 years, to 58% at 10 years postdiagnosis.1 Although early-stage CRC is associated with a 90% 5-year survival rate, only 39% of CRCs are detected early.1

The 5-year survival rate for CRC that has spread regionally to adjacent organs or lymph nodes is 69%, but for metastatic CRC (mCRC) that has spread to distant organs, it is a dismal 12%.1

Nonmetastatic CRC is treated surgically, either by endoscopic removal of adenomatous polyps or by colectomy for higher-risk sessile polyps. Colectomy with the removal of lymph nodes is recommended when the polyp specimen is fragmented, has margins that cannot be assessed, or has an unfavorable histopathology. Invasive nonmetastatic CRC is also treated surgically, with colectomy and the removal of regional lymph nodes. Adjuvant therapy is not recommended for noninvasive, nonmetastatic CRC (ie, stage I). Patients with low-risk locally invasive (ie, stage II) disease have the option of being followed with observation, enrolling in a clinical trial, or being treated with adjuvant therapy, such as capecitabine or 5-fluorouracil (5-FU) plus leucovorin.

Approximately 50% of patients with CRC develop colorectal metastases, and most of them have disease metastatic to the liver that is not resectable.3 Often, mCRC develops after treatment for CRC, but up to 34% of patients present with mCRC to the liver, which has a worse prognosis.3 Surgical resection is an option for some patients, and chemotherapy (eg, with FOLFOX, FOLFIRI [5-FU plus leucovorin and irinotecan], or FOLFOXIRI [infusional 5-FU plus leucovorin, oxaliplatin, and irinotecan]) may render resectable some disease metastatic to the liver or to the lung.3

Other options for metastatic disease include targeted agents, such as bevacizumab (Avastin), a humanized monoclonal antibody that blocks vascular endothelial growth factor (VEGF); cetuximab and panitumu­mab; monoclonal antibodies against the epidermal growth factor receptor; and the polykinase inhibitor regorafenib, all in combination with 5-FU plus leucovorin or other agents.3-5 Despite advances in the treatment of mCRC, its poor prognosis suggests the need for more effective agents or for combination therapies.

FDA Approval of Ziv-Aflibercept
On August 3, 2012, the US Food and Drug Administration (FDA) approved ziv-aflibercept (Zaltrap; sanofiaventis) for use in combination with a FOLFIRI chemotherapy regimen to treat adults with mCRC that is resistant to or has progressed after an oxaliplatin-containing regimen.6,7

This approval has generated some controversy concerning the cost versus the benefits of ziv-aflibercept. Several oncologists wrote in an editorial in the New York Times that Memorial Sloan-Kettering Cancer Center (MSKCC) would not prescribe ziv-aflibercept for patients with advanced CRC, because MSKCC staff believed that ziv-aflibercept was not better than “a similar medicine” (ie, bevacizumab), and because it was priced at more than twice the cost of bevacizumab.8 This is despite data from VELOUR, the phase 3 clinical trial that showed that adding ziv-aflibercept to FOL­FIRI improved overall survival (OS) compared with FOLFIRI alone,7 as discussed later in this article.

This decision by MSKCC to not use the drug because of cost is not unusual, but such a public disclosure is, although cost issues are increasingly influencing clinical decisions. Of note, 2 of the 3 oncologists authoring the editorial were consultants for a pharmaceutical company that manufactures bevacizumab, the drug that competes with ziv-aflibercept.9 The overall response to the editorial has resulted in a 50% price cut for ziv-aflibercept, although the higher price was based on a higher dose that is not frequently used.10 Nevertheless, the results of the phase 3 clinical trial VELOUR have been called “an important milestone for patients with mCRC.”11

Clinical Pharmacology
Description and Mechanism of Action
Ziv-aflibercept is a recombinant fusion protein that acts as an angiogenesis inhibitor (ie, a VEGF trap). It was created via recombinant DNA technology and is expressed in Chinese hamster ovary cells. Ziv-aflibercept is a dimeric glycoprotein that includes the VEGF-binding portions of the extracellular domains of the human VEGF receptors 1 and 2 fused to the constant region (ie, Fc portion) of the human immunoglobulin G1. Ziv-aflibercept acts as a soluble receptor binding to the endogenous ligands of human VEGF-A, human VEGF-B, and human placental growth factor. The binding of ziv-aflibercept to these ligands can inhibit their binding to and activation of their receptors. This, in turn, can decrease both neovascularization and vascular permeability. In preclinical models, ziv-aflibercept inhibited formation of new blood vessels in animals and inhibited the growth of colon tumor xenografts in mice.12,13

Dosing and Administration
Ziv-aflibercept is indicated for use in combination with FOLFIRI for the treatment of mCRC that is resistant to or has progressed after a regimen containing oxaliplatin. Ziv-aflibercept is administered by intravenous (IV) infusion over 1 hour every 2 weeks at a dose of 4 mg/kg. It should be administered before any components of the FOLFIRI regimen.13

VELOUR: A Phase 3 Clinical Trial
Ziv-aflibercept was approved by the FDA after a priority review based on the results of the phase 3 clinical trial, VELOUR, a multinational, randomized, double-blind study comparing FOLFIRI in combination with ziv-aflib­ercept or with placebo in patients with mCRC.7

Study Design
The patients enrolled in the trial had mCRC that was resistant to or progressed during or within 6 months of treatment with oxaliplatin-based combination chemotherapy, with or without previous bevacizumab therapy. A total of 1226 patients were randomly assigned in a 1:1 ratio to receive either 4-mg/kg ziv-aflibercept as a 1-hour IV infusion on day 1 or to receive placebo.13 In addition, all patients received FOLFIRI (180-mg/m2 irinotecan as a 90-minute IV infusion and 400-mg/m2/dL racemic leucovorin as a 2-hour IV infusion on the same day, followed by an IV bolus of 400-mg/m2 5-FU, followed by a continuous IV infusion over 46 hours of 2400-mg/m2 5-FU). This treatment was repeated every 2 weeks until disease progression or until unacceptable toxicity.

The primary efficacy end point was OS. Patients were stratified within treatment groups by Eastern Cooperative Oncology Group performance status and by whether they had received previous treatment with bevacizumab.13 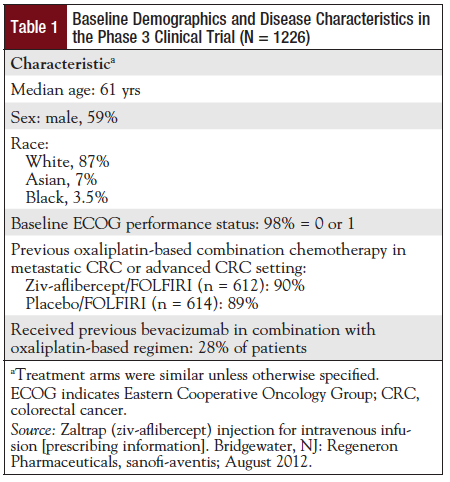 Patient Population
Table 1 lists the key baseline demographics and disease characteristics of the patients who were enrolled in VELOUR.

The most common grade 3 and grade 4 adverse events (AEs) found in ≥20% of patients that occurred at a higher rate in the ziv-aflibercept arm (≥2% difference between treatment arms) were neutropenia, diarrhea, hypertension, leukopenia, stomatitis, fatigue, proteinuria, and asthenia. The most frequent AEs resulting in the permanent discontinuation of ziv-aflib­ercept therapy in ≥1% of patients included asthenia/fatigue, infections, diarrhea, dehydration, hypertension, stomatitis, venous thromboembolic events, neutropenia, and proteinuria.13

Ziv-aflibercept was approved by the FDA with a Boxed Warning, as described at the end of this article. 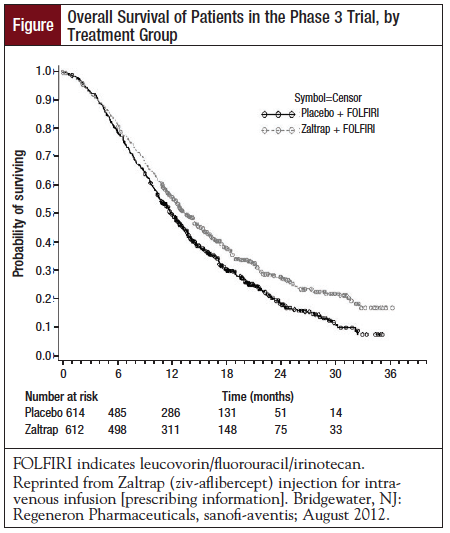 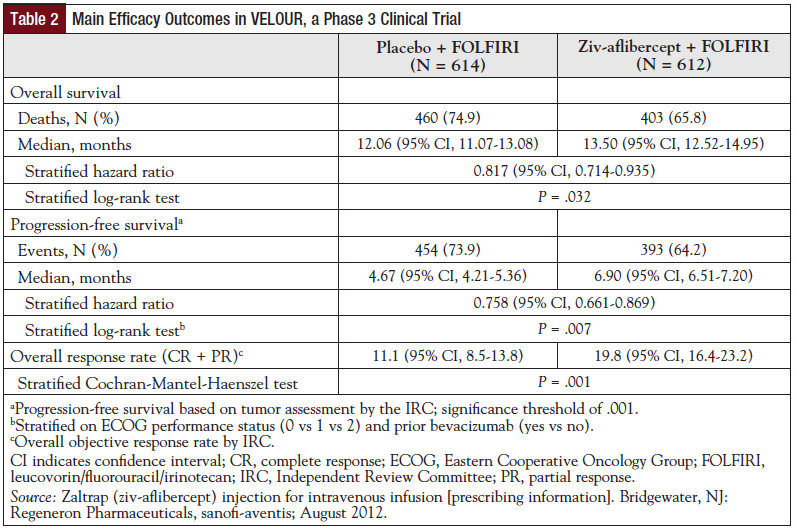 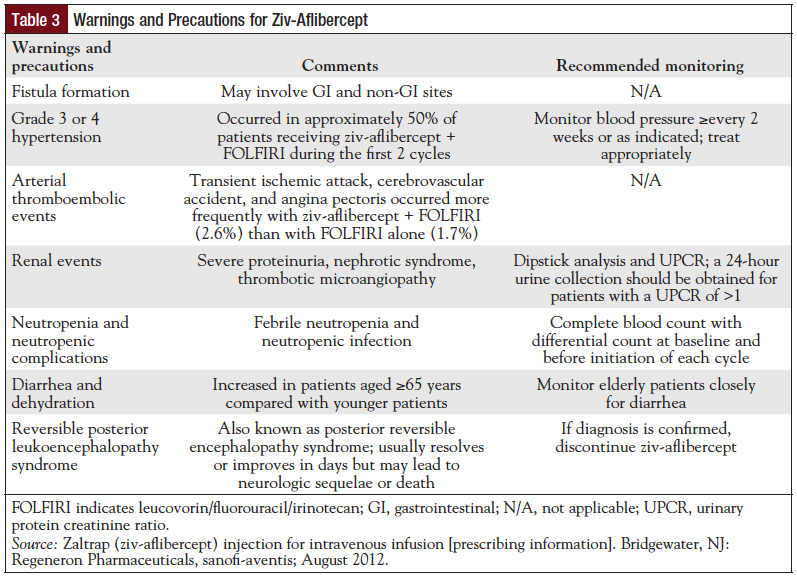 Precautions and Discontinuation
Ziv-aflibercept should be used with caution in patients with associated conditions; discontinuation of therapy or dose modification is required in several situations, as listed in Table 3.

Specifically, the drug should be discontinued in patients with any of the following conditions13:

Ziv-aflibercept should be delayed in patients with neutropenia until the neutrophil count is ≥1.5 × 109/L.13

Boxed Warning
Ziv-aflibercept was approved by the FDA with a Boxed Warning regarding several serious and potentially fatal AEs, including13:

Conclusion
CRC is a major cause of mortality in the United States. Approximately 50% of these patients develop mCRC. Despite advances in the treatment of mCRC, its poor prognosis suggests the need for more effective agents or for combination therapies. Although alternative therapies are available for this patient population, considering the high mortality rate, the approval of a new therapeutic option, such as ziv-aflibercept, for patients with this devastating disease may offer improved survival for some of the patients whose disease has failed to respond to previously available, FDA-approved therapies. Clinicians should use proper precautions when prescribing ziv-aflibercept, as specified in the prescribing information.