There were 41 new drug approvals by the US Food and Drug Administration (FDA) in 2014, the highest number since 1996, when a record 53 new drugs were approved.1,2 This number is significantly higher than the 27 drugs approved in 2013. As has been the case for the past 3 years, specialty and orphan drugs dominated the approval list. By comparison, 1996, the record year for new drug approvals, had only 2 biologic drugs approved: interferon beta-1a (Avonex) for the treatment of multiple sclerosis and insulin lispro (Huma­log) for the treatment of diabetes. Notably, the largest selling drug of all time, atorvastatin (Lipitor), was part of the 1996 approvals.

In just less than 2 decades, the drug approval landscape has undergone a seismic shift, with 28 of the 41 new drugs approved in 2014 considered biologic or specialty agents. Even more astounding is that 41% of the newly approved agents in 2014 are for the treatment of rare diseases.2

Rare diseases continue to attract a large proportion of the drug development focus. The first ever biologic treatments for idiopathic pulmonary fibrosis—pirfenidone (Esbriet) and nintedanib (Ofev)—were approved in October 2014. New treatments for orphan diseases, such as Morquio syndrome and multicentric Castleman’s disease, also emerged in 2014. As noted, 41% (17) of the new drugs approved in 2014 were classified as orphan drugs (Table), because they target rare diseases.2 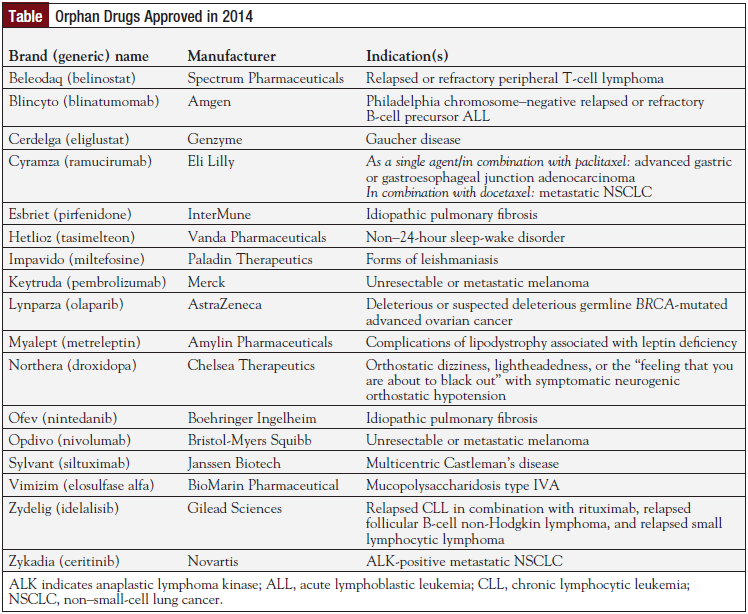 Also in 2014, eliglustat (Cerdelga) was approved as the only first-line oral therapy for certain adults with Gaucher disease type 1. This trend of increasing drug approvals for orphan diseases is expected to continue into 2015, with the first drug ever to be approved by the FDA for Waldenström’s macroglobulinemia, ibrutinib (Imbruvica), already approved in early 2015.

Infectious Disease Treatments in the Spotlight

The FDA approvals in 2014 encompassed 10 therapeutic categories, an increase from the 8 clinical areas in 2013. Infectious diseases as a whole had the highest number (N = 11) of approvals, a definite turnaround from the recent past, where FDA approvals of infectious disease treatments were relatively few. While grabbing the lion’s share of headlines, agents for the treatment of hepatitis C virus (HCV) infection accounted for only 2 approvals. The remaining approved treatments were broadly distributed across bacterial, fungal, viral, and parasitic infections.

Certainly, the most visible approvals in 2014 were for the new direct-acting antiviral drugs for the treatment of HCV. The new combination of ledipasvir and sofosbuvir (Harvoni) and the new triplet of ombitasvir, paritaprevir, and ritonavir tablets, copacked with dasabuvir tablets (Viekira Pak), which are the first direct-acting antiviral drug combinations for the treatment of HCV, were definitely the most publicized launches in 2014. In the first 8 weeks after the launch of ledipasvir plus sofosbuvir in October, sales were growing even faster than for sofosbuvir (Sovaldi), the previous record-setting treatment for HCV infection approved in 2013. Although the final figures are not yet in, experts estimate that sofosbuvir will have racked up more than $2 billion in sales in less than 3 months in 2014.3

Also included in the infectious diseases approvals are 3 antibiotics for the treatment of skin and soft-tissue ­infections—oritavancin (Orbactiv), dalbavancin (Dalvance), and tedizolid phosphate (Sivextro).4 In addition, a fourth antibacterial, the combination of ceftolozane and tazobactam (Zerbaxa), was approved in 2014 for the treatment of adults with complicated intra-abdominal or urinary tract infections. All 4 antibacterial drugs were granted the Qualified Infectious Disease Product (QIDP) designation. These are the first 4 drugs to receive the QIDP designation by the FDA, a designation granted by the FDA to drugs deemed to have particular promise.4

Commenting on these 4 approvals, Edward Cox, MD, MPH, Director of the Office of Antimicrobial Products in the FDA’s Center for Drug Evaluation and Research, said, “The approval of several new antibacterial drugs this year demonstrates that we are making progress in increasing the availability of treatment options for patients and physicians. We must continue to help foster the development of new antibacterial drugs and encourage prudent use of existing treatments to conserve their utility.”4

Cancer Drugs Remain Among the Top Approvals in 2014

Ceritinib (Zykadia) is a therapeutic alternative for patients with metastatic, ALK (anaplastic lymphoma kinase) positive non–small-cell lung cancer that has progressed or has become intolerant to crizotinib (Xalkori).5

According to the FDA’s report on its annual drug approvals, 2014 was a year of many firsts.2 Notable was the number of first-in-class agents approved. Of the 41 drugs approved, 17 (41%) were considered by the FDA to be first in class. These agents provide novel mechanisms of action for treating medical conditions not currently provided by existing therapies.5 As noted, this matches the 41% of orphan drugs approved for rare diseases. Similarly, 17 (41%) of the novel drugs were designated by the Center for Drug Evaluation and Research as fast track approvals, which are drugs with the potential
to address unmet medical needs.2

Among the 2014 new drugs, 9 (22%) were designated as breakthrough therapies, based on preliminary clinical evidence demonstrating that the drug may result in substantial improvement on at least 1 clinically significant end point over other available therapies. Breakthrough therapy status is designed to help shorten the development time of potentially clinically promising new therapies. Drugs that were approved as breakthrough therapies in 2014 include the combination of ledipasvir and sofosbuvir; the triplet of ombitasvir, paritaprevir, and ritonavir, plus dasabuvir; blinatumomab; and idelalisib.2

Furthermore, 61% of all 2014 approvals were done under the FDA’s priority review program, and 8 drugs were approved through the accelerated approval process. Finally, 78% of the new drugs in 2014 were approved on the first cycle of review, and 63% were approved in the United States before being approved in other countries.2

The year 2014 was very active in terms of FDA drugapprovals, only surpassed by the 1996 record high of 53. The trends seen in previous years continue, with the majority of new approvals being in the specialty drug category, and the cancer and orphan or rare diseases are among the top priorities in drug research and development.

Unlike 2013, the year 2014 saw the emergence of a substantial number of new agents for the treatment of infectious diseases, including the first 2 all-oral therapies for HCV infection. Overall, 2014 was an exciting year for new drug approvals, thereby providing some substantial challenges for Pharmacy & Therapeutics committees and for benefit design programs.