Once-a-Day Harvoni (Ledipasvir plus Sofosbuvir), a New Oral Combination for the Treament of Patients with Genotype 1 Chronic Hepatitis C Infection

Hepatitis C virus (HCV) infection is the most common blood-borne disease; approximately 3.2 million Americans and 130 million to 170 million individuals worldwide are infected with HCV.1,2 Chronic HCV infection has been called a silent epidemic; the disease can remain quiescent for decades before clinically significant symptoms appear.3 Because many Americans who are currently living with HCV were infected before blood screening testing for HCV was performed, the prevalence of HCV complications is likely to rise as these individuals enter their 50s and 60s.4

Research indicates that by 2015, more than 3 million individuals will have HCV infection that has been present for 20 years or more.5 This will result in a significant increase in the incidence of advanced liver disease, including cirrhosis, decompensated cirrhosis, and liver cancer.5,6

In addition to causing substantial morbidity and mortality, HCV is associated with significant financial consequences.3 A 2000 study estimated that between 2010 and 2019, the direct medical expenditures for HCV-­related conditions will reach nearly $11 billion, the cost of morbidity from disability related to decompensated cirrhosis and hepatocellular carcinoma would reach approximately $21 billion, and the societal cost of premature mortality for patients aged <65 years will exceed $54 billion (in 1999 US dollars).7

In the early 1990s, single-agent interferon was the standard of care for patients with HCV infection. Single-­agent interferon represented a significant therapeutic advancement, because until then there was no treatment available for HCV infection; however, single-agent ­interferon offered a sustained virologic response (SVR) rate of less than 10% in patients with HCV genotype 1, the most common HCV subtype.8 Interferon was then used in combination with ribavirin, increasing the SVR rate by another 14% to 22%.8 In the early 2000s, pegylated forms of interferon dosed once weekly were introduced. The combination of pegylated interferon with ribavirin increased SVR rates to more than 50% in patients with HCV genotype 1.9,10 However, HCV genotype 1 was less responsive than HCV genotype 2 and genotype 3.9,10 Because of this variability in HCV response, low response rates in common HCV subpopulations (ie, black patients, patients with cirrhosis), and side effects associated with interferon and ribavirin, there remained a need to develop novel antiviral therapies.8

The treatment options for patients with HCV have evolved significantly in the past few years. HCV is currently the only chronic viral infection that can be cured with antiviral therapy.8 Although the prevention of infection should be the primary goal of treatment for HCV, no HCV vaccine is available. Therefore, the goals of current anti-HCV approaches are to cure infection, to prevent complications, and to prevent the spread of this disease to other individuals.8

In 2011, 2 first-generation protease inhibitors, telaprevir (Incivek) and boceprevir (Victrelis), also known as direct-acting antiviral drugs, were approved by the US Food and Drug Administration (FDA) for HCV genotype infection; both agents offer significant efficacy as measured by the SVR rates.11,12

Interest and investment in novel therapies for HCV remain strong in light of the increasing incidence of HCV (and its costly complications), unmet patient needs, and the identification of new drug targets through clinical research and discovery.15 Efforts continue, with the goals of improving the pharmacokinetics and the tolerability of these agents, as well as determining treatment strategies––interferon-containing and interferon-­free (all oral) regimens––that optimize outcomes.16

Ledipasvir was a new agent that was approved for use in combination with sofosbuvir.17,18 Ledipasvir plus sofosbuvir combination therapy was reviewed under the FDA’s priority review program, which expedites the review of drugs that treat serious conditions and that, if approved, would provide significant improvement in the safety or efficacy of the treatment.17

“With the development and approval of new treatments for hepatitis C virus, we are changing the treatment paradigm for Americans living with the disease,” said Edward Cox, MD, MPH, Director of the Office of Antimicrobial Products in the FDA’s Center for Drug Evaluation and Research.17 “Until last year, the only available treatments for hepatitis C virus required administration with interferon and ribavirin. Now, patients and health care professionals have multiple treatment options, including a combination pill to help simplify treatment regimens.”17

The combination pill contains a fixed-dose of ledipasvir and sofosbuvir, 2 direct-acting antiviral agents against HCV.18 Ledipasvir is an inhibitor of the NS5A protein, which is required for HCV replication. Sofosbuvir inhibits the HCV NS5B RNA-dependent RNA polymerase, which is also required for viral replication. Sofosbuvir is a nucleotide prodrug that undergoes intracellular metabolism to form a pharmacologically active triphosphate that can incorporate into the HCV RNA.18

The 2-drug, fixed-dose combination contains 90 mg of ledipasvir and 400 mg of sofosbuvir in a single tablet.18 The recommended dosage is 1 tablet taken orally once daily with or without food. Table 1 describes the recommended treatment durations for the specific subsets of patients with HCV genotype 1 infection.18 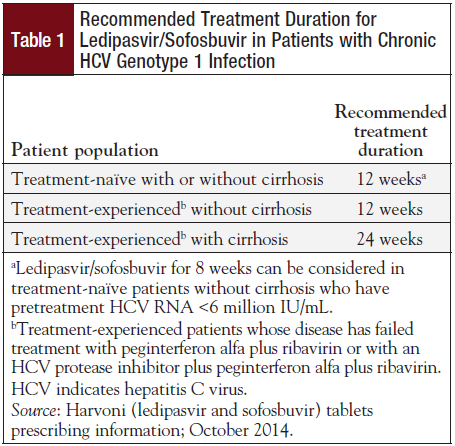 ION-1 Clinical Trial (Study 0102): Treatment-Naïve Adults with or without Cirrhosis

The SVR rates for the 12-week treatment groups in the ION-1 clinical trial are summarized in Table 2. Ribavirin did not increase the response rates with ledipasvir-­sofosbuvir.18 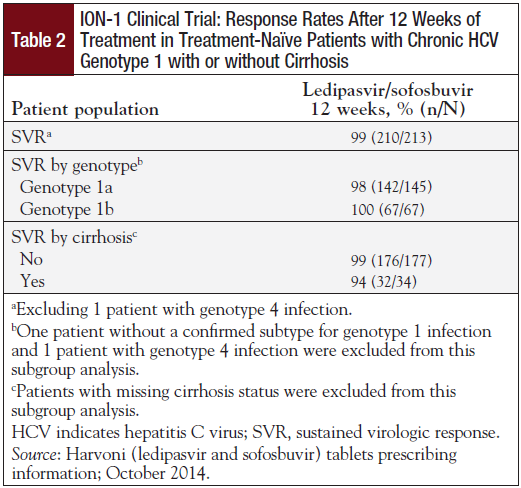 Virologic failure was rare in the ION-1 patient population, occurring in 0.3% of 865 patients.19 No clinical or virologic predictors of virologic failure were identified in these patients, with the exception of suspected nonadherence to therapy.19

The SVR rates for the treatment groups in the ION-2 clinical trial are summarized in Table 3. Ribavirin did not increase the response rates with ledipasvir-sofosbuvir.18 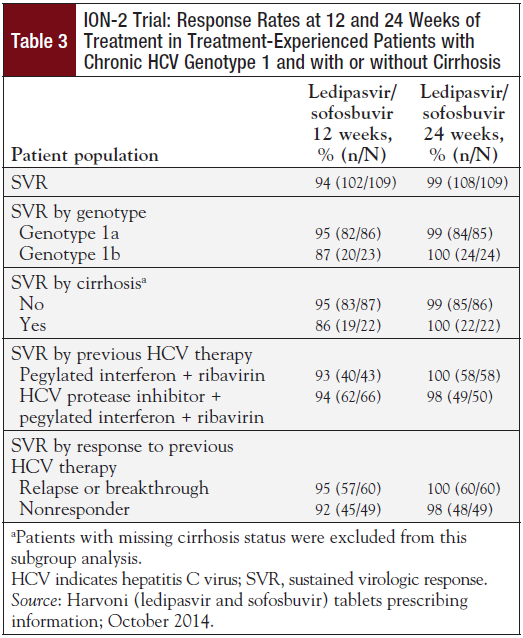 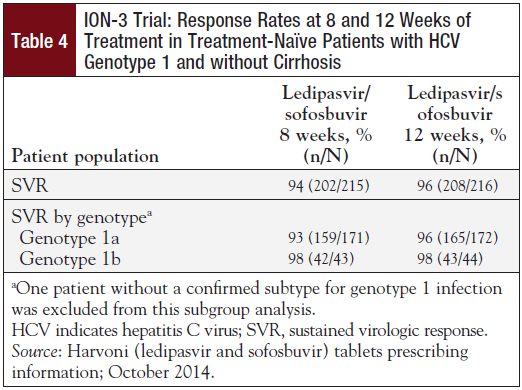 The SVR rates in patients with characteristics that are historically associated with a poor response to interferon-­based treatment, such as high viral load at baseline, black race, and HCV genotype 1a infection, were similar to patients without these characteristics.20

The safety assessment of ledipasvir-sofosbuvir was based on the pooled data from the 3 phase 3 clinical trials of patients with HCV genotype 1 with compensated liver disease (with or without cirrhosis). These 3 studies evaluated ledipasvir-sofosbuvir combination therapy for 8 weeks, 12 weeks, or 24 weeks and included 215 patients, 539 patients, and 326 patients, respectively.18

Adverse reactions that occurred in ≥10% of patients who received ledipasvir-sofosbuvir (8 weeks, 12 weeks, or 24 weeks) were fatigue and headache.18 Nausea, diarrhea, and insomnia were also reported at rates between 5% and 10%18; the majority of these adverse reactions were categorized as grade 1.18

The percentage of patients who permanently discontinued 8 weeks, 12 weeks, or 24 weeks of ledipasvir-sofosbuvir treatment as a result of adverse events was 0%, <1%, and 1%, respectively.

Related drugs. Ledipasvir-sofosbuvir combination therapy should not be used with other drugs that contain sofosbuvir.18

Nursing mothers. It is not known whether ledipasvir-sofosbuvir combination therapy and its metabolites are present in human breast milk.18 The developmental and the health benefits of breastfeeding, as well as the mother’s clinical need for ledipasvir-sofosbuvir and any potential adverse effects on the breastfed child from the drug or from the underlying maternal condition, should be considered.18

Pediatric use. The safety and efficacy of ledipasvir-sofosbuvir have not been established in pediatric patients.18