Chronic lymphocytic leukemia (CLL), the most common type of leukemia in adults, is a cancer of B-cell lymphocytes, which originate in the bone marrow, develop in the lymph nodes, and normally fight infection by producing an immune response.1,2 In CLL, excess B-cells accumulate in the bone marrow and blood, where they crowd out healthy blood cells.2

The Leukemia & Lymphoma Society has estimated that more than 15,500 Americans were diagnosed with CLL in 2013.3 The incidence of CLL increases significantly among people aged ≥50 years; only a small fraction of adults are diagnosed in their 30s or 40s.3 The majority of patients who are diagnosed with CLL are ­asymptomatic, and the diagnosis is made as a result of a routine blood test that shows a high white blood cell count.4 As it advances, CLL can cause swollen lymph nodes, an enlarged spleen, anemia, and infections.2

Early-stage CLL is typically not treated, whereas patients with symptomatic intermediate- or high-risk CLL are usually receiving chemotherapy combined with a targeted monoclonal antibody drug, either rituximab or another CD-20 targeted agent.6 Studies comparing treatment with chemotherapy, such as fludarabine or the combination of fludarabine and cyclophosphamide, with chemoimmunotherapy (fludarabine and rituximab) have shown that rituximab-containing combinations significantly improve complete response rates, remission duration, and overall survival of previously untreated patients with CLL.7 In November 2013, the US Food and Drug Administration (FDA) approved obinutuzumab (Gazyva) in combination with chlorambucil for the treatment of patients with previously untreated CLL.8 Obinutuzumab is a humanized monoclonal antibody that targets CD20 on the surface of CLL cells.9

There is no consensus regarding the management of patients with relapsed and refractory CLL. Treatment decisions are based on several factors, including the timing of relapse, the patient’s age, disease extent, overall health status, and previous therapies.10 Agents that are frequently used (either alone or in combination) in the relapsed and/or refractory CLL setting include alem­tuzumab, bendamustine, chlorambucil, fludarabine, ofatumu­mab, and rituximab.11

As a chronic illness, the cost burden associated with CLL is significant. A recent published cost analysis was conducted in Germany using both the direct and indirect costs of CLL.12 European investigators found that the total per-patient cost for patients with CLL was €9753 (approximately $13,500) annually compared with €4807 (approximately $6600) annually for individuals in the control group with the same age and sex. In this study, the economic burden associated with CLL was primarily driven by inpatient and pharmaceutical costs. From a societal perspective, productivity loss was the highest cost driver associated with a diagnosis of CLL.12

John C. Byrd, MD, Director of the Division of Hematology at the Ohio State University Comprehensive Cancer Center in Columbus, and a principal investigator in the ibrutinib CLL trial, stated, “Rarely does a drug come along with so much potential to help CLL patients….I have been impressed with the promising and durable response rates we have seen in patients.”16

Ibrutinib is a small-molecule inhibitor of BTK, a signaling molecule of the B-cell antigen receptor and cytokine receptor pathways.15 As an irreversible covalent inhibitor, ibrutinib continues to inhibit BTK even after the drug is metabolized.17 Preclinical studies have demonstrated that ibrutinib prevents the activation of downstream pathways affected by BTK, promotes cancer-cell apoptosis, and inhibits cell proliferation.18

In patients with CLL who have received at least 1 previous therapy, the recommended dose and schedule for ibrutinib is 420 mg orally once daily. Ibrutinib should be administered at the same time each day, and should be swallowed whole with water. The capsules should not be opened, broken, or chewed.15

Table 1 summarizes ibrutinib dose modification guidelines for patients with any grade ≥3 nonhematologic toxicity, grade ≥3 neutropenia with infection or fever, or grade 4 hematologic toxicities. Ibrutinib may be reinitiated at the starting dose after symptoms of toxicity have resolved to grade 1 or to baseline.15

Because ibrutinib is primarily metabolized by the cytochrome (CY) P450 enzyme 3A, it should not be coadministered with strong or moderate CYP3A inhibitors. The concomitant use of strong CYP3A inhibitors that are taken on a long-term basis (eg, rit­onavir, indinavir, nelfinavir, saquinavir, boceprevir, telaprevir, nefazodone) is not recommended.15 Increased drug exposure is also expected in patients with hepatic impairment; however, there are insufficient data to recommend a dose of ibrutinib in patients with baseline hepatic impairment.15

Less than 1% of the ibrutinib dose is excreted renally.15 Exposure to ibrutinib is not altered in patients with creatinine clearance (CrCl) of >25 mL/min. No data exist for patients with severe renal impairment (CrCl <25 mL/min) or for patients on dialysis.15

The safety and efficacy of ibrutinib for the treatment of patients with CLL were demonstrated in a phase 1b/2 open-label, multicenter trial. This trial included 48 patients with CLL who had previously received multiple therapies.15

In this study, ibrutinib was given orally, 420 mg daily, in continuous 28-day cycles until disease progression.15 The primary end point of this phase 2 study was overall response rate, which was defined as partial response and complete response. Tumor response was evaluated by an Independent Review Committee using a modified version of the International Workshop on CLL criteria.15

The median age of the 48 patients with CLL evaluated for this trial was 67 years (range, 37-82 years).15 Most patients were male (71%) and Caucasian (94%). All of the patients had an Eastern Cooperative Oncology Group performance status of 0 or 1. The patients’ median time since the diagnosis of CLL exceeded 6 years (80 months). These patients had received 1 to 12 (median, 4) previous therapies for CLL.15

An increase in lymphocyte counts, defined as a ≥50% increase from baseline and above absolute lymphocyte count of 5000/mcL, was observed in 77% of patients with CLL who received ibrutinib in this phase 2 study. Isolated lymphocytosis occurred during the first 4 weeks of ibrutinib therapy and resolved after a median of 23 weeks (range, 1-104+ weeks).15

As a condition for the accelerated approval of ibrutinib for patients with CLL, the FDA instructed the drug manufacturer to submit the results of phase 3 randomized clinical trials to the FDA. In January 2014, the manufacturer of the drug notified the FDA that based on the favorable results of a planned interim analysis, the phase 3 RESONATE clinical trial that compared ibrutinib and ofatumumab for patients with CLL was ended early.16,19 This phase 3 clinical trial randomized patients with previously treated CLL or with small lymphocytic lymphoma who were not considered candidates for treatment with purine analog-based treatments to receive either ibrutinib or the anti-CD20 monoclonal antibody ofatumumab.19 The results of this interim analysis showed significant improvements in progression-free survival and overall survival with ibrutinib compared with ofatumumab for patients with previously treated CLL in this phase 3 trial.16,19 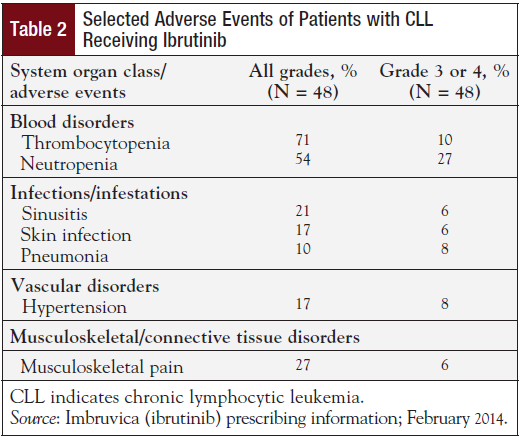 Ibrutinib has no contraindications.15

Hemorrhage. Bleeding events, including bruising of any grade, were observed in 63% of patients with CLL who received 420 mg of ibrutinib daily.15 Of the patients with CLL, 6% had grade ≥3 bleeding events, including subdural hematoma, gastrointestinal bleeding, and hematuria. Clinicians should consider the benefit-risk of ibrutinib in patients who require antiplatelet or anticoagulant therapies, and the benefit-risk of withholding ibrutinib for at least 3 to 7 days before and after surgery depending on the procedure and the risk of bleeding.15

Myelosuppression. Grade 3 or 4 cytopenias, including neutropenia (27%) and thrombocytopenia (10%; Table 2), were reported in the patients with CLL receiving ibrutinib.15 Patients should undergo monthly complete blood cell counts while taking ibrutinib.15

Renal toxicity. Serious and even fatal cases of renal failure have occurred with ibrutinib.15 Increases in creatinine levels up to 1.5 times the upper limit of normal (ULN) occurred in 23% of patients with CLL receiving ibrutinib and from 1.5 to 3 times the ULN in 4% of patients with CLL. Patients receiving ibrutinib should undergo periodic creatinine level monitoring and should maintain hydration.15

Secondary primary malignancies. Other malignancies, including skin cancers (8%) and other types of carcinomas (2%), have been observed in patients with CLL who have received ibrutinib.15

Embryo-fetal toxicity. Based on animal studies, ibrutinib can cause fetal harm when administered during pregnancy. Women should be advised to avoid becoming pregnant while taking ibrutinib.15

Pregnant women. Ibrutinib has been assigned Pregnancy Category D. Based on animal data, ibrutinib can cause fetal harm when administered to a pregnant woman.15

Nursing mothers. Ibrutinib has not been studied in nursing mothers. It is not known whether this agent is excreted in human breast milk. Because many drugs are excreted in human milk and because of the potential for serious adverse events with ibrutinib, a decision should be made to discontinue nursing or to discontinue taking ibrutinib, with the importance of the drug to the mother kept in mind.15