Multiple myeloma is a type of blood cancer that is caused by abnormal growth of plasma cells that divide and replicate excessively.1,2 The multiplication of these abnormal myeloma cells in the bone marrow can cause low blood counts and weaken the immune system. In addition, multiple myeloma can damage the bones, kidneys, and other organs and tissues.1,2

In the United States, approximately 34,920 new cases of multiple myeloma are diagnosed annually; in 2021, an estimated 12,410 patients will die from the disease.1 The 5-year relative survival rate for all patients with multiple myeloma is 55.6% (based on 2011-2017 data).1 Multiple myeloma is diagnosed more often in older people (aged 65-74 years) than in younger people, but it can occur at a much earlier age. This type of blood cancer is 1.6 times more common in men than in women.1

On March 27, 2021, the US Food and Drug Administration (FDA) approved idecabtagene vicleucel (Abecma; Celgene), an intravenous, BCMA-directed, genetically modified autologous CAR T-cell therapy, for the treatment of adults with relapsed or refractory multiple myeloma who have received ≥4 lines of therapy, including an immunomodulatory drug, a proteasome inhibitor, and a CD38-targeted monoclonal antibody.4 The FDA granted idecabtagene vicleucel breakthrough therapy and orphan drug designations for this indication.4

Idecabtagene vicleucel is a first-in-class BCMA-directed agent and the first CAR T-cell therapy approved by the FDA for patients with multiple myeloma. The drug was approved with a Risk Evaluation and Mitigation Strategy program, because of the risk for serious neurologic adverse events, including cytokine-release syndrome (CRS); the FDA also requires a postmarketing observational study to further evaluate the long-term safety of this novel therapy.4

“While there is no cure for multiple myeloma, the long-term outlook can vary based on the individual’s age and the stage of the condition at the time of diagnosis. Today’s approval provides a new treatment option for patients who have this uncommon type of cancer,” said Peter Marks, MD, PhD, FDA’s Director of the Center for Biologics Evaluation and Research, in response to this approval.4

BCMA is expressed on the surface of normal and malignant plasma cells that are implicated in multiple myeloma.5 Overexpression of BCMA promotes the growth of myeloma cells, as well as cell proliferation and survival.6 Idecabtagene vicleucel is the first CAR T-cell therapy that targets BCMA. The antigen-specific activation of idecabtagene vicleucel results in CAR T-cell proliferation, cytokine secretion, and the subsequent death of BCMA-expressing cells.5

Idecabtagene vicleucel, a cell suspension administered by intravenous infusion, is available as a single dose in the range that contains a cell suspension of 300 to 460 ×106 CAR T-cells in 1 or more infusion bags.5

Idecabtagene vicleucel is available as an autologous cell therapy—using the patient’s genetically modified cells—via intravenous infusion only; a leuko-depleting filter should not be used. Before idecabtagene vicleucel is infused, the patient’s identity should be confirmed and a lympho-depleting chemotherapy regimen of cyclophosphamide and fludarabine should be administered.5

Before infusion, the patient should receive premedications with acetaminophen and an H1-antihistamine; in addition, tocilizumab and emergency equipment should be available before infusion and during the recovery period. The prophylactic use of dexamethasone or other systemic corticosteroids should be avoided; their use may interfere with the activity of idecabtagene vicleucel.5

The FDA approval of idecabtagene vicleucel was based on the results of the KarMMa study, an open-label, single-arm, multicenter phase 2 clinical trial of patients with relapsed and/or refractory multiple myeloma who had received ≥3 previous lines of antimyeloma therapies, including an immunomodulatory drug, a proteasome inhibitor, and a CD38-targeted monoclonal antibody.7

The efficacy results were based on the overall response rate and duration of response, as assessed by an Independent Response Committee using the International Myeloma Working Group (IMWG) criteria.5 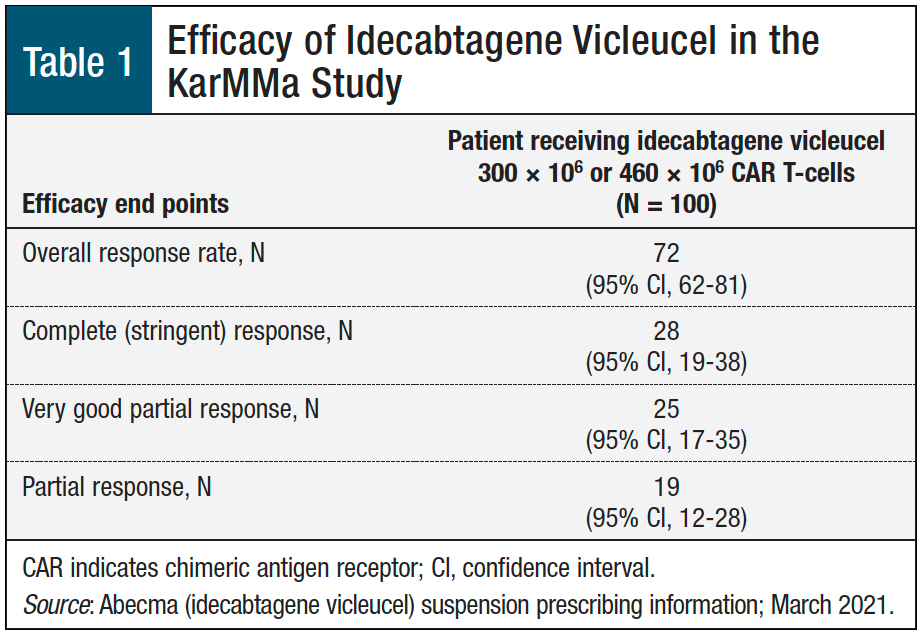 The median time to initial response in the study was 30 days (range, 15-88 days).5 The median duration of response was 19 months for patients with a stringent complete response and 11.9 months for all responders (Table 2).5 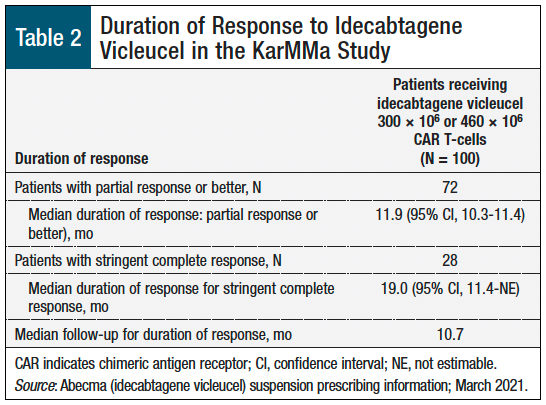 Data are not available on the presence of idecabtagene vicleucel in human milk or its effect on the breastfed infant or milk production.5

No clinically important differences in the efficacy of idecabtagene vicleucel were observed between patients aged ≥65 years and younger patients.5

The prescribing information for idecabtagene vicleucel includes a boxed warning about the risk for CRS, including fatal or life-threatening reactions, as well as severe or life-threatening neurologic adverse events. Idecabtagene vicleucel should not be used in patients with an active infection or with an inflammatory disorder, and patients should be monitored for neurologic events.5

Other serious warnings include the risk for hemophagocytic lymphohistiocytosis, macrophage activation syndrome, including fatal and life-threatening reactions, and the risk for prolonged cytopenia with bleeding and infection, including fatal outcomes after stem-cell transplantation for hematopoietic recovery.5

Patients should be advised to refrain from driving and engaging in hazardous activities for 8 weeks after infusion of idecabtagene vicleucel.5

Idecabtagene vicleucel is a first-in-class BCMA-targeted therapy and the first CAR T-cell therapy to receive FDA approval for the treatment of adults with relapsed or refractory multiple myeloma. It offers a novel treatment option for patients who have received at least 4 other types of anti-myeloma drug therapy. In the pivotal KarMMa study, idecabtagene vicleucel demonstrated a 72% overall response rate and an 11-month median duration of response among patients who had a partial or complete response to treatment. Idecabtagene vicleucel, a new type of gene therapy, may improve outcomes for patients whose disease has stopped responding to or continued to progress after several types of current therapies.