Promising Oncology Drugs in the Pipeline

Among a host of investigational drugs for the treatment of cancer featured during the 2010 meeting of the American Society of Clinical Oncology, the following agents were highlighted as showing great promise.

Crizotinib: Although targeting only a small subset of patients with non–small-cell lung cancer (NSCLC), the investigational agent crizotinib—an oral inhibitor of the ALK gene, which is mutated in about 5% of patients with NSCLC—produced unprecedented response rates in a phase 2 study.

In 82 patients with advanced lung cancer who also had the ALK fusion gene, 6 months after treatment with crizotinib the objective response rate was 57%, disease control rate (response plus stable disease) was 87%, and progression-free survival (PFS) was 72%, reported Yung-Jue Bang, MD, PhD, of Seoul National University College of Medicine, Korea. Commenting on the study, Anil Potti, MD, of Duke University, Durham, NC, noted that these outcomes were particularly impressive, considering that patients had failed multiple lines of therapy and at best had a 10% chance of responding to traditional treatment.

ARQ197: The novel agent ARQ197, which is also being investigated for the treatment of NSCLC, significantly prolonged PFS by 6.4 weeks when added to erlotinib. Overall survival (OS) paralleled these results, reaching 36.6 weeks when added to erlotinib compared with 29.4 with erlotinib alone. Joan Schiller, MD, with the University of Texas Southwestern Medical Center, Dallas, presented the results of the global study in 167 patients with advanced disease. She noted that the benefits of adding ARQ197 to erlotinib were more marked when analyses were restricted to the 111 patients with non-squamous cell histology, whose remission was prolonged by an average of 9.2 weeks (a 39% improvement) and whose survival averaged 14 weeks longer (a 42% improvement). The drug selectively inhibits c-MET, a key growth factor in NSCLC that has been associated with poor prognosis.

Ipilimumab, an antibody against cytotoxic T-lymphocyte antigen 4, is the first treatment to show a survival benefit in unresectable stage III/IV melanoma. In an international randomized phase 3 trial of 540 patients, ipilimumab given every 3 weeks led to a 45% 1-year survival rate and 23% 2-year survival rate compared with 25% and 14%, respectively, in the gp100 vaccine control arm, and reduced the risk of disease progression by 32%. Median OS was 10 months with ipilimumab compared with 6.4 months in the control arm, reported Steven O’Day, director of the melanoma program at the Angeles Clinic and Research Institute, Los Angeles.

Eribulin mesylate, a member of a new class of antineoplastics called halichondrins, made news in breast cancer. “Eribulin is unique in that it is the only single agent to show a survival benefit in heavily pretreated metastatic disease. These are striking findings,” said principal investigator Christopher Twelves, MD, of the University of Leeds in the United Kingdom. The Epidemiological Study of Familial Breast Cancer (EMBRACE) was a global randomized phase 3 trial involving 762 patients with metastatic breast cancer who had received an average of 4 previous chemotherapy regimens. Patients were assigned to intravenous eribulin every 3 weeks, or to treatment according to their physician’s choice, which could be a cytotoxic, endocrine, or biologic agent. Median survival improved from about 10 months with standard single-agent therapy to 13 months with eribulin, and 1-year survival was 54% and 44%, respectively.

Olaparib, one of an emerging class of agents called PARP inhibitors, produced responses in 41% of patients with ovarian cancer that had mutations in the BRCA gene and in 23% of 53 women without BRCA mutations in a phase 2 study presented by Karen Gelmon, MD, of the British Columbia Cancer Agency, Vancouver. Although the study was small, it was hailed as one of the most important at the meeting by James H. Doroshow, MD, of the National Cancer Institute (NCI). Patients received olaparib 400 mg twice daily on a continuous basis in 4-week cycles. Median PFS was 219 days, which was especially striking for patients with advanced ovarian cancer. Previous studies have shown that olaparib is active in tumors with BRCA mutations (including breast cancer) but its activity in non–BRCA-related disease was considered particularly encouraging.

The multitargeted kinase inhibitor vandetanib slowed disease progression by 50% in patients with medullary thyroid cancer, a rare malignancy (5% of thyroid cancers) that currently has no effective treatment. In a phase 3 trial—the largest-ever study of this tumor—331 patients with advanced or metastatic disease received vandetanib or placebo. Disease progression was reduced by 54% with vandetanib. Of note, 50% of the placebo-treated patients had relapsed by 16 months; in contrast, by 24 months 50% of the vandetanib-treated patients were still relapse-free, reported Samuel A. Wells, MD, of the NCI, which sponsored the study. 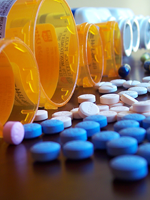