The slowing pace of research & development (R&D) among major pharmaceutical manufacturers is expected to continue for the foreseeable future, according to Brian Kolling, PharmD, Senior Director, Pipeline and Trend Forecasting, Part D, Prescription Solutions, San Diego, CA. Presenting what has become one of the best-attended sessions at the AMCP meeting and titled “Scanning the Pharmaceutical Pipeline,” Dr Kolling observed that although the overall pace of drug development has remained stable for the past 2 years, it has declined considerably from its peak 4 or 5 years ago.

Fewer drugs today are reaching phase 3 trials, and consequently, fewer new drugs are reaching the market, and major drug manufacturers are reducing their investment in R&D.

The reasons for this, according to Dr Kolling, include the “patent cliff,” along with the maturation and saturation of many therapeutic classes. These challenges have forced drug makers to rethink their market entry, development timelines, and therapeutic focus.

These R&D limitations are further compounded by the need for greater investment to overcome increasing barriers to market entry, in part by the FDA’s growing requirements for safety and eliminating redundancy, and the astronomical cost of initiating clinical trials for products that will never see the light of day.

In this current landscape, Dr Kolling noted, manufacturers are especially reluctant to commit their resources to therapeutic classes in saturated markets. In fact, most money is spent on phase 1 or 2 clinical trials, in which the failure rate is greatest. The major pharmaceutical companies have been addressing these concerns with the following strategies: 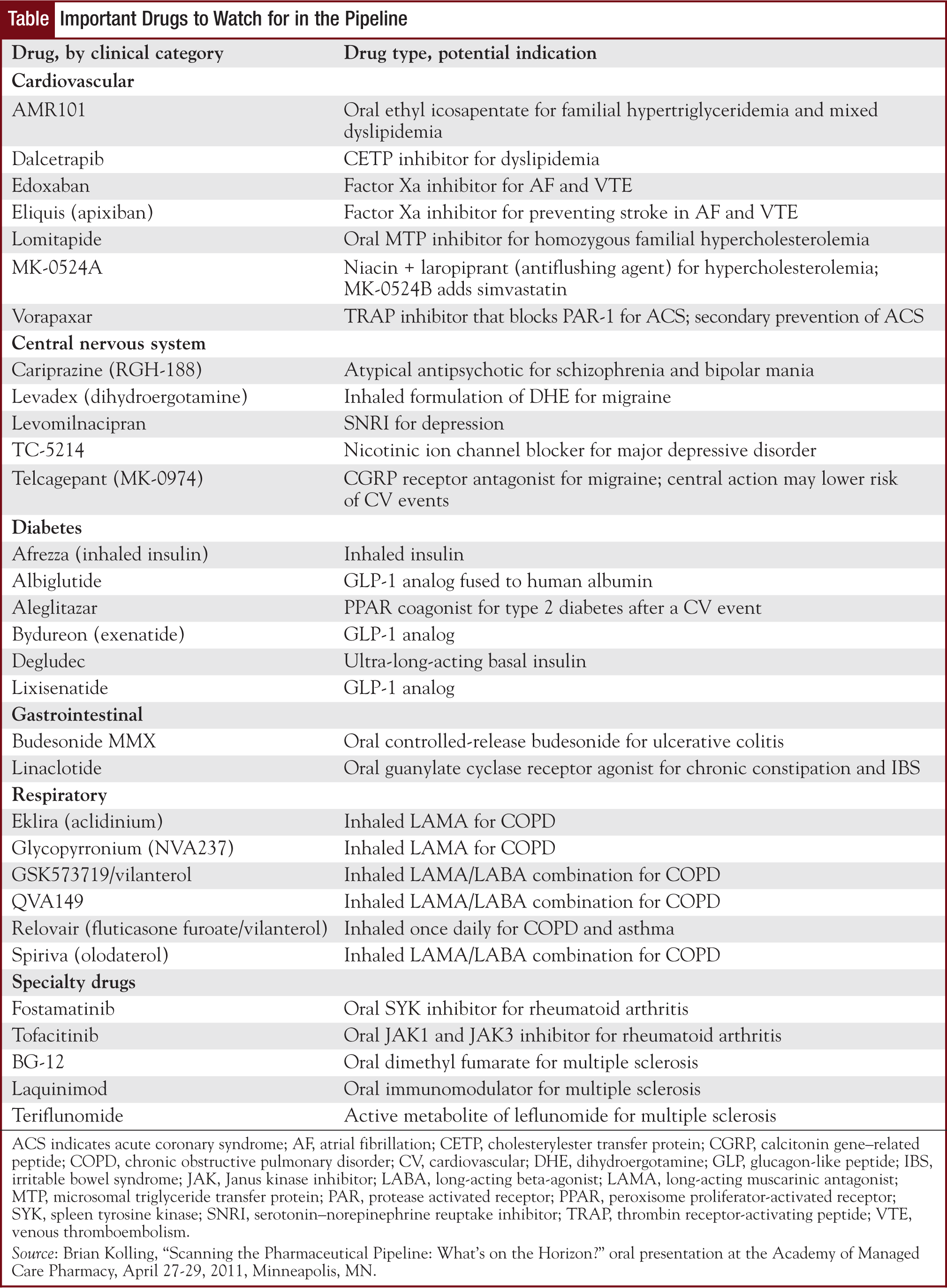 The 8 top disease states in the pipeline, according to Dr Kolling, are being led, not surprisingly, by cancer, followed by central nervous system diseases, diabetes, infectious diseases, respiratory diseases, cardiovascular disease (CVD), vaccines, and arthritis. Some of the most promising agents to watch for in the current pipeline are listed in the Table.

Despite the prominence of CVD as the leading cause of death in the United States, the CVD pipeline has slowed down considerably, likely because of market maturation. In 2006 it was the third targeted disease in the pipeline; today it has moved to 6th place, trailing behind infectious and respiratory diseases.

Still, suggested Dr Kolling there are some exciting medications that will either be entering the market soon or are in late-stage development that payers will want to watch and plan for, such as the impending patent loss for Zyprexa and Lipitor; the recent FDA approval of the 2 hepatitis C drugs telaprevir and boceprevir; and the phase 3 trial results for the rheumatoid arthritis drug tofacitinib.